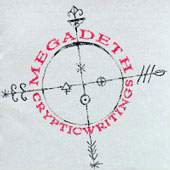 There has never been an album that so finely and clearly sums up the evolution of a band's sound. After three strong, distinct works with their most successful line-up ever, it was a real challenge for Megadeth to choose where to go next. For the last seven years they walked a tightrope of thrash, heavy, and melodic metal that had just the right chemistry to keep the fans interested. So what's next, the lightning fast thrash sound of "Rust and Peace", the heavy, face-pounding approach of "Countdown to Extinction", or the moderate, melodic sound of "Youthanasia". The answer is simple, three equal parts of each!

Let's start with the real stuff, who would have ever thought Dave Mustaine would go back to the "Rust in Peace" sound after seven years. 'FFF', 'Vortex', the Maiden-esque 'She-Wolf', and 'The Disintegrators' are the choice tracks on "Cryptic Writings" that are worth the whole album! Speed and energy returning to Megadeth was like the pull of the massive switch that brought Frankenstein back to life: Megadeth's resurrection! Generally placed near the end of the album, these songs unleash their pent-up fury once the listener has already been half tranquilized by the mellow tracks, giving the best effect.

Now to skip forward in time to "Countdown to Extinction", probably Megadeth's most popular and memorable album. Borrowing its sound are 'Mastermind', 'Sin', 'Secret Place', 'Have Cool Will Travel', and are, much like most of "Countdown...", mediocre songs at best. There is the groove, the flow, the heaviness, sure, but not much more. Closely eluding the mediocrity is the complicated and interesting song 'Sin', one of my favorites on the album.

On to the melodic era of Megadeth with the four tunes from the "Youthanasia" breed. It's not surprising that, along with 'Use the Man' and 'I'll Get Even', it's from this batch they plucked the singles 'Trust' and 'Almost Honest'-which I can confidently label as the worst song in Megadeth's history. The most mainstream and radio-friendly, I can't help but cringe at these songs that don't even stand up to the quality of "Youthanasia". Below par, very bad.

Bottom Line: A cohesive summary of "Rust in Peace", "Countdown to Extinction", and "Youthanasia". A solid album from a band that seems to have forgotten the word original.