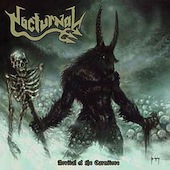 Nocturnal exist since almost 20 years and have never left the underground. One can describe this situation with the word stagnation, but some hordes just do not intend to see the bright light of day. Arrival of the Carnivore marked their first full-length after countless previous releases and their maturity shimmers through the material, although the songs do not lack fierceness. The band heralds a very merciless approach and its black thrash compositions are fueled by razor-sharp riffs and precise drumming. The songs do not fall victim to their own primitiveness. This is sometimes a problem in the blackened thrash department, but here we have tracks that offer more than punk-influenced verse-chorus-verse patterns. Of course, nobody has ever hailed the band for its complex monuments or its prog rock tendencies. Nevertheless, they integrate more than one or two riffs in each and every song and create intense sonic bastards.

The vocals are done by Andy, the man who lend his voice to numerous Witchburner releases as well. His authentic nagging is always a pleasure, although his pitch lacks variety. He masters all challenges, only the boozy "Burn this Town" with its sing-along chorus has not been tailored to his individual skills. But honestly speaking, I don't think that this song in its entirety fits the context of the album. Nocturnal stand for beastly assassination, not for more or less violent party songs. And so, they rush through their songs, full speed ahead, with an overdose of riffs that makes up for the absence of melodies. Sometimes I miss this iota of catchiness that helps each and every style to improve the impact of the music, but this is nothing that mars the overall impression in a significant manner. More important is that the riffs do not go nowhere, and here Nocturnal show their real strength. The guitar work leaves a spontaneous, skillful and energetic impression.

The booklet shows the logo of the "Hellbangers Moselfranken" and the solidarity with bands like Desaster may give you an idea how the album sounds. By the way, it is well produced. It presents the right mix of dirt and clarity. Maybe the voice of Andy is not loud enough in comparison with the guitars, but he struggles successfully to keep up with the instrumentalists. Due to the lack of memorable parts, I do not really have highlights I could recommend specifically. Nonetheless, the album works as a whole and meets the daily requirement of fury with great ease. The band did not yet reach the excellence they showed on Storming Evil, but the foundation-stone for further deeds was laid. The comparatively epic closer indicated their later masterpiece most insistently. Speaking of masterpieces, the last one was released in 2014. Isn't it time for a worthy successor?