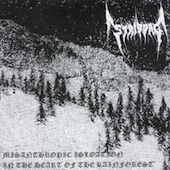 Type: Compilation
Release Date: April 30th, 2003
Label: Asgard Musik
Genre: Ambient, Black
1 Nocturnal, Transparent Rainbow
2 Misanthropic Isolation
3 The Long Dark Path
4 To The Gate Of Beliar
5 As The Night Emits Its Shadow
6 Where Cold And Darkness Meet
7 House Covered In Thorns
8 The Dawn Of Winter
9 Into The Gloomy Moon's Silhouette
10 Forest Of Fear
11 In The Heart Of The Rainforest
12 As Twilight Falls
13 The Dawn Of Winter
14 Out Of The Fog She Appeared Dressed In Black

We are the metalheads. We are extreme. We don't do social distancing. We do misanthropic isolation. Right? Yes? No? Come on! Yes, seriously. At least a little? Pretty please? Satan? Anyone? Oh well. At least we can pretend, and the best way to start is just about here...

Admittedly, 2001 and 1998 aren't as "distant, legendary history" in black metal terms as 1992 or 1993, and no stories are being told about those glorious days. To qualify for that, the recordings on this re-release would have to be, say, five years older. But, after the 1997 Cold Winter Moon demo, these two are the earliest Striborg recordings. As such, they are already a must for any fan. And wait until you hear how good they are...

First five (out of fourteen in total) songs are, strangely, the younger ones. In the Heart of the Rainforest opens with a windy intro and kicks in in that completely recognizable way: audibly and relaxedly plucked bass, hissing cymbals and the guitar tone consisting of more distortion than the actual "tone."

Yes, if I ever get to wander through the Tasmanian forests and don't hear Striborg playing in the air, I'll ask for my money back. What this man is doing, by himself, makes Tasmania feel as majestic, threatening and mysterious as anything his Scandinavian comrades have done for their own landscapes of origin. You can feel the rain, feel the forest, and damn it, don't gaze around with your mouth open, hypnotized and lost, thinking how you and Nature are one and have always been. Look where you are going because those moist leaves could be covering a trap, and the slimy stuff covering the branches and dripping on your path doesn't look healthy, either.

The only glitch on In the Heart of the Rainforest is the fact that the five songs don't quite sound alike so there must have been more sessions. But who cares?

Misanthropic Isolation is even harder to listen to. What a surprise. Even this early, it's Striborg as I know it (or him), through and through. Nothing new, but nothing "old," either. Compared to Striborg's more recent output, the guitar sound loses nothing in the intensity, except that all the harsh distortion was achieved in a much less sophisticated way. Simply, it's the classic "angry wasp in a tin jar" sound, but the rest of what you can hear makes Misanthropic Isolation a classic Striborg. There are the endless blasts, the recognizable screams and the sloppy drums. Of course, when you realize that, while being fast or slow, simple or complicated, they are equally sloppy, the joke is on you. Sin Nanna just did it the way it was supposed to be done. The bass is quite silent, but it matches the guitar in the careless, convicting insanity. Ranging from hypnotic to conventional black metal, Misanthropic Isolation is actually well above something you'd consider a mere demo, a showcase of one's possibilities, and not at all unlike mid-period Striborg.

So, if you're one of the chosen misanthropes, and you think that Darkthrone’s "A Blaze in the Northern Sky" sounds too commercial and way too technical, this one is warmly recommended. But if you know Striborg from before, you either already own these demos or are already looking for them anyway, right? Here they are, ready to take you away. Because, if I really have to be isolated, I'd rather be in Tasmania than in front of my computer.