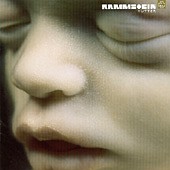 After four years of touring, Rammstein decide it’s time to go back to the studio and finally give the fans something new. They have a very unique style and cleverly evade the threat of being pigeonholed into any one label as "Mutter" ("mother" in German) shows the band still experimenting with a wide range of musical directions and successfully combining them into a sound of distinctly their own. I’m impressed! From the slow, sorrowful title-track and eerily atmospheric 'Ich Will' to the very heavy, groove-centered songs like my favorite 'Feuer Frei!' or the fast shredder 'Adios', the songs create an original and refreshing album that any fan of heavy music can safely pick up and enjoy, though fans of 97’s "Sehnsucht" will most likely be disappointed, as it delivers nothing new.

Now Till Lindemann’s voice is truly what shapes Rammstein’s character and uniqueness for me. The band would be nothing without his famous, commanding tone that stirs up those feelings of the vast power and dark eminence of Imperial Germany in WWII. The cold atmosphere is fit to be marching music for conquering SS troops, and this gets more radio airplay in North America than any other foreign-language artist! But this his gruff, militaristic voice which I find intimidating and powerful (and at times utterly ridiculous) does let up on a few occasions to give us a softer and melodic inflection, and it all helps the atmosphere.

Overall, "Mutter" is essentially a clone of "Sehnsucht" but their unique industrial metal sound is still more refreshing than ever! Some weaknesses are becoming apparent. The singer is using that fact that most of the fans don’t have a clue what he’s saying to his advantage and often over-exaggerates every syllable in his words to give his words a strange and mysterious quality, most noticeably in 'Spielhur' which sounds like a German language lesson. While really exciting on the first few listens, "Mutter" proves that it doesn’t have much supporting it, and thus can get a uninteresting before long.

Bottom Line: The four-year wait has made us all thirsty for the Rammstein sound but I’d be lying if I said it was worth the wait. Great stuff, but has a hard time standing up to "Sehnsucht".