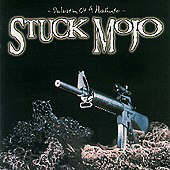 Type: Full-Length
Release Date: 2000
Label: Century Media Records
Genre: Groove, Rock
1 A Lesson In Intensitiuity
2 Hate Breed
3 Set The Tone
4 April 19th
5 Raise The Deadman
6 Drawing Blood
7 An Open Letter
8 Give War A Chance
9 Feel It Comin Down
10 The One
11 Evilution
12 Declaration
13 The Ward Is My Shepherd
14 Walk The Line

For years Stuck Mojo have been a major driving force within America’s underground hard rock/metal scene. With Declaration of a Headhunter, they take their greatest aim at mainstream success while still staying true to their hard-hitting sound. The result is Stuck Mojo‘s catchiest material to date! Being the band’s final release, it is also a testament to their many years of struggling and hard work.

The album’s music and lyrics were written completely by guitarist/vocalist Rich Ward. His lyrics are politically charged and thought provoking while his music is extremely stylish and original. Stuck Mojo have always featured various vocal styles on their albums. This one has the least amount of hip hop oriented vocals, which many metal fans have criticized in the past. This time around there is a greater emphasis on the soulful and melodic clean vocals of new bassist Dan Dryden. These vocals really help to enhance the incredibly melodic yet punchy guitar licks. Many of the dual guitar harmonies sound like they could have easily been placed on any melodic death metal cd.

The song structures are pretty similar to past efforts, yet the rapping verses have been trimmed down, leaving less room for lead vocalist Bonz. Those doubting the band’s credibility as true and talented musicians will be shut up once and for all with the amazing instrumental track The Ward Is My Shephard.

One of the greatest things about this disc is the quality of the actual music and production. The sound eminence is very sharp and the production is flawlessly handled by Andy Sneap. This is clearly the band’s most focused and mature album and a fine one to leave behind as the last hurrah. It brings together everything Stuck Mojo stood for in the past while injecting the most catchiest hooks the band has ever recorded. Never before has a rap/metal release come along and not become so blunt and ridiculous that you want to just puke it up. This is genuine hard rock/metal music well deserving of your hard earned money.

Bottom Line: If you like catchy hard rock/heavy metal music full of energy and soul, then this is for you!