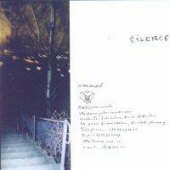 The scary thing about this contemporary, mechanical neo-Ulver is that straight from the word go I could successfully distinguish that this was in fact Ulver, the new non-black metal Ulver. While this may seem like an absurd and weird statement; the overall and uncompromising realisation for all of us is that Ulver as what we knew a few years ago is dead and buried and we must embrace the ideals of Ulver (present day) or be forever consumed by the cyberness of Ulver-urban style...

“Silence Teaches You How to Sing” picks up where “Perdition City” left off, being the second part of the trilogy of “Perdition City”, “Silence Teaches You How to Sing” and “Silencing the Singing”. Mechanistic and calculated in its inception the trilogy navigates the weird and wonderful world that is firmly locked away in the creative brains of a few famous musical oddities; Garm being one such oddity.

Whilst not titled anywhere on the single from Ulver, there is only one song and one must assume the title refers to the single track. A lengthy affair of a shade under 25 minutes, 'Silence Teaches You How to Sing' once again delves into the night music of “Perdition City”. Through seedy jazz bars and dark metropolitan alleyways Garm and Co. one again give realisation to the fact that there is a world besides metal. A whirring transition of beeps and whistles similar to that of skipping or fastforwarding tracks on the latest CD your dad purchased you or perhaps changing the channels on the television. In combination with more prominent mood sections of “Perdition City”, “Silence Teaches You How to Sing” once again opens the door to the realm of lounge music.

All is well if you are a fan of present day Ulver, one should definitely grab this lovely masterpiece, if however you are not a fan of what Ulver had to offer on “Perdition City” then perhaps a large step in the opposite direction may be a wise move.

Bottom Line: Appealing to present day Ulver junkies (like me), “Silence Teaches You How to Sing” is a specialist album that is crafty as it is intelligent. Definitely an acquired “Perdition City” taste.