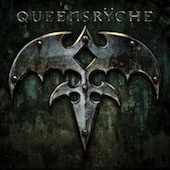 I don’t like drama leaking over into my music; leave that to the rap and pop people to mull over and play out with usually hilarious results. This Queensrÿche/Tate garbage is beyond my scope of interest, but I will say that I’m infinitely more interested in the non-Tate Q than his watery adult-oriented soft rock effort. Let’s examine the non-Tate Queensrÿche album aptly titled Queensrÿche.

After such tripe as Hear in the Now Frontier and pretty much everything after that I admit to giving up on Queensrÿche for the most part. My Q from 1984 is long gone; I’m not delusional about that at all. However, Todd La Torre, fresh off a wonderful stint with Crimson Glory, brings a fresh, albeit familiar tone to the Q camp. There seems to be a new life injected into a band that once issued tracks like “Deliverance” and “The Lady Wore Black” oh so many moons ago. Even though Chris DeGarmo’s presence is still a missing element, that doesn’t stop the Q machine from leaving that insipid soft rock tripe to die in the settling dust. The rich and lush tones that made Queensrÿche a true progressive metal champion is slowly, loudly re-emerging in this latest effort.

What is most interesting about Queensrÿche is the use of some old school-sounding verse riffs so badly missing since Operation Mindcrime and before. One listen to “Redemption” and you certainly can hear former glories poking up above the mire of the mediocrity the band has been left to wallow in of late. That heavy riff in there is something criminally foreign in a Queensrÿche album, and I’m certainly glad that trend is changing for the better. La Torre is so into the words he’s singing, so magnetic and honest over the truly inspired music the boys deliver with a vigorous intensity long thought lost under the wagging finger of Geoff Tate. Every facet of the band’s finer moments are reexamined here, right down to the awesome power ballad of “A World Without”, which has an affixed antiquity to it without sounding dated or rehashed. Todd’s effort here is so pure and wonderful to hear again, and this is from a guy that doesn’t really do ‘power ballads’ as I feel it’s an ultimate oxymoron, but every now and again….

I find exciting things all over this record, and sure, that might be my nostalgic side coming out to root around for small fragments of my past, but the true Queensrÿche vies to reclaim its coveted crown. From the strong vocal performance to the rejuvenated guitars, Queensrÿche offers a musical olive branch to the masses past and present that might have left the band for dead over the years. There is a subtle tenacity to tracks like “Open Road” that seem to call upon the band’s ability to create vast visuals within select chords and tonal resonance. The same feeling occurs for me when I hear “Redemption”, which is the musical practice of introspection for this guy. I won’t go on to say that the mighty machine that was Queensrÿche is back at full throttle, but this is a wonderful step forward for the band. I truly hope that Todd sticks around a while. Some marriages were simply not meant to last, and the current cancerous Tate-era is long over; no amount of nostalgia or sentiment should be a driving force to revisit such pedestrianism again. The album before me is one of positivity and reeks of possibilities for a bright future.

With amazing attention to detail and an integral glance backwards, Queensrÿche digs into the well-worn bag of tricks and assembles a winner by all accounts. As I said, don’t expect an unprecedented leap back to 1985, but you can easily anticipate an entertaining and fluid look forward at what a band recently re-energized can achieve when all cylinders are in tandem.