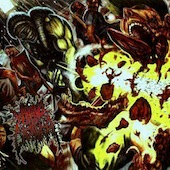 Waking The Cadaver. All of us metalheads have heard this band name or heard their songs, more properly their debut full-length, Perverse Recollections Of A Necromangler. This album has been the most hated, insulted, should-be-buried-six-feet-under album of all time, described as a bunch of breakdowns with incomprehensible inhaled vocals, inaudible bass, monotone guitars, and drums unable to keep the tempo. I won't argue with this; in fact, this is all true, but still I hear the music (if it can be called that) of this album, made on a grindcore-based style. You may think I'm joking, that this is just a joking intro to spew acidic vomit later on this album, but no. I like this album. In a certain way, it can remind you of Torsofuck and Guttural Secrete. Now, onto the reasons that make this album a (failed) grindcore attempt.

This album, more than an attempt to some deathcore style, stretches the line of grindcore (goregrind more properly), and though they overuse breakdowns, it fits this a lot on this album. The vocals, while inhaled (which is something I despise), are good enough and meant to be incomprehensible, but if this had some exhaled growl or a reduced numbers of pig squeals, it could have been better. The guitars, while monotone, play some good rhythms once in a while. The bass, well... the only song I heard it in was in 'Type A Secretor'. Actually, there are some good tracks on this album, though the re-recorded version of the demo tracks are not that good, but you will like them. Personally, this album is more decent than their recent releases and I got so disappointed with the other full-length since they suppressed that grind part of them in that release.

Now, the bad points of this album are: the vocals - they're inhaled, incomprehensible, and overuse squeals all over the album. The guitars - monotone, extremely simplistic with not even an attempt to make a solo, and overused harmonics. The bass - since it's almost inaudible, I can't find anything good or bad with it. The drums - they are good sometimes, but they play extremely fast in unnecessary parts of some songs. The songs - breakdown after breakdown after breakdown. They even have breakdowns in the breakdowns!

Despite the massive hate this album has received (and a justified one, of course), I recommend this album if you like goregrind and the like. Who knows, you may hear what no one hears in this album, like me. Don't get me wrong, I'm not saying that this album is almost perfection (that would be an insult to the other extreme bands out there), but it's interesting to hear.

Highlights: 'Connoisseur's Of Death', 'Blood Splattered Satisfaction', 'Chased Through The Woods By A Rapist', 'Tire Iron Emblugeonment' and 'Type A Secretor' (for the bass part only).