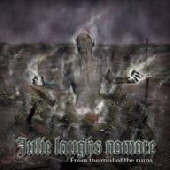 Type: Full-Length
Release Date: 2001
Label: Iron Glory Records
Genre: Death, Melodic
1 Mistress Of Death
2 Children Of The Empty Cross
3 From The Mist Of The Ruins
4 Bringer Of Misery
5 The Iron Gate
6 Eternity Is Just One Step Away
7 Lords Of Pleasure
8 200 Years

First time I saw their name I thought this had to be a joke band and moved on to something more evil sounding. But once I heard their latest CD “From the Mist of the Ruins” I understood why there’s not much to laugh about. These Swedes (Surprised? I’m not) are one of the most refreshing melodic-death metal bands out there who other than just writing some sweet melodies, like most of their peers do, they also provide a healthy dose of aggression and that which is most important: originality.

Actually Death metal is not the best choice of words here because even though the Death style might be the main ingredient, a mix of Black, Heavy, Thrash, Power and even some Viking metal would more appropriately fit the description of JLN. Did I forget just plain Rock? Let’s just say that those guys swept through Scandinavia starting from In Flames went to States for some Blackie Lawless (WASP) screams and landed in Germany to pick up some clean Hansi Kürsch (Blind Guarding) vocals. That should do as for what kind of music JLN plays.

Now how do they do it? Unbelievably well. As you’ve already noticed vocals are the driving force here. Daniel "Danne" Carlsson varying vocal lines range from growlings and blackish screams to plain rough vocals ala Blackie Lawless (and those screams just rule here) or clean ones a lot like Hansi Kürsch. For that simple reason this CD is just a pleasure to listen to but not only. The rest of the band creates very hymnic atmosphere based on killer melodies supported by fist pumping guitar riffs. If they could only drop those blast beats that although well executed don’t present anything extraordinary and don’t add anything to the JLN sound the score would be almost perfect. But who cares about the score anymore... get this CD or you will laugh no more.

Bottom Line: Julie Laughs Nomore are simply phenomenal!!! If they were on a bigger label with better promotion there is a huge chance that most of us would re-think our top spots in Melodic/Death metal scene long time ago. Well, better late than never. JLN are already one of the best.