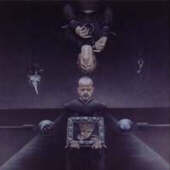 Since the beginning, Enslaved have always been about musical evolution. It wasn’t all about dancing around in Viking helmets while wielding battle-axes. It’s more than that. For them, it has been about keeping firm in their roots while “using old skills in new ways, and new skills in old ways”. Any fan of the band should have seen this album coming their way. Did you really think the band was going to remake albums like “Frost” or “Blodhemn” over and over? And why would you really want them to anyway? Sorry if it isn’t “metal” enough for you. The fact is, Enslaved are doing what they want to do, and they are ready to move on without you.

Continuing where they left off, Enslaved take the new era of their music that was “Mardraum” and progress with it, forming “Monumension”. It’s got that same atmosphere almost. It has that kind of heavy, yet warm and dark atmosphere surrounding it. Enslaved bring in so much more with this record though. Often you will run into hypnotizing passages of music, doomy guitar lines, or dark psychedelic moods that the band only hinted towards with “Mardraum”. Much like Neurosis in a sense, Enslaved have great song composing ability that brings in more than just one mood per song. It can be completely destructive with heaviness (No, this isn’t Cryptopsy... this heaviness is more focused on the atmosphere), or be intensely beautiful within the same song. The clean vocals are definitely used less sparingly than before. They are such an integral part of the song. Grutle Kjellson sounds better than ever before. His voice is like a rag soaked with emotion, and when he sings he is drenching it out onto you. Much like this is the guitar playing. Ivar Bjørnson and R. Kronheim play phenomenally. Not only are they skillful guitar players, they are both amazing musicians. There is in fact a difference, you know. They play those guitars like it’s a part of themselves. Drummer Dirge Rep does an amazing job. The removal of Harald Helgeson after “Eld” was the best move the band could make. Of course any Enslaved drummer will be compared to Trym Torson, but I honestly don’t know if he would have been better than Dirge Rep for this album. There isn’t anything about this album that I can find a flaw in. From the every aspect of the music itself to the band members, it’s a seamless package of Enslaved.

Bottom Line: While many fans will toss and turn at night in their beds wondering why Enslaved aren’t so “true” anymore, they don’t even know the meaning of the word, or the band. Where Enslaved goes from here is their choice, but for now, “Monumension” is monumental.