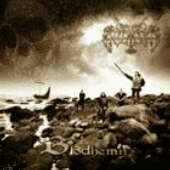 After releasing the amazing “Eld”, the band took a bit of a turn and created an album of raging black metal. Not preferring to be labeled as black metal, it’s near impossible to deny any influences from the genre. On “Blodhemn”, the band churns out nine tracks of solid black metal that holds as much as or more power than any other band.

Opening with 'Audbumla', it’s not going to get much lighter for a while. The short opener launches you into an aural assault of pulsating black metal. But it’s not just black metal, it’s Enslaved. There are a few things that make this an amazing album, and that push Enslaved to the forefront of the scene. First, they have a distinctive sound that they familiarize you with. The chromatic edge of the guitars that has been here since day one is still here. The sound they put out has the perfect production – not so clean as to lose any atmosphere the band was trying to achieve, but not so bad that there isn’t any clarity. Next, they can actually play at a fast tempo and hold it together perfectly. It’s not just a wall of noise, or a band struggling to play their own music. Thirdly, while playing this blistering music, you can actually feel the emotion in the music. This is a rare thing for many bands of this style. The title track 'Blodhemn' shows this so well in the solo, or all of 'Brishinghamen', along with many others. Fourth, the band can switch moods seamlessly. One minute it could be furious, and then the next in a more epic state that was evident on “Eld”. Lastly, the band injects life into a genre that has been destroyed by a countless amount of bands. Not only is it uncompromising, it still retains melody, talent, drive, and destroys the competition.

The addition of drummer Dirge Rep (Ghenna) is a great thing. His aggressive playing style fits the album so well. The addition of second guitars R. Kronheim has added a new dimension to the band. Both him and Ivar Bjørnson play together perfectly. Their ideas work on a number of different levels. Lastly, singer Grutle Kjellson sticks mainly to his black metal rasp, which is hard to gauge. It’s what you’d expect for the style, but when he goes into his chants they are great. The addition of two members has done the band quite a lot, both on this album and in the future.

Bottom Line: An album that solidified Enslaved among the black metal elite and pleased quite a few fans that liked “Frost”. This is a must have for any fans of black metal, new or old. Enslaved have always been above their contemporaries, and this is no exception.