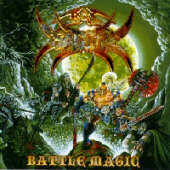 Type: Full-Length
Release Date: 1998
Label: Cacophonous Records
Genre: Black, Heavy, Orchestral, Symphonic
1 Battle Magic
2 Naked Steel (The Warrior's Saga)
3 A Tale from The Deep Woods
4 Return To The Praesidium Of Ys
5 Crystal Shards
6 The Dark Liege Of Chaos Is Unleashed At The Ensorcelled Shrine Of A'Zura Kai
7 When Rides The Scion Of The Storms
8 Blood Slakes The Sand At The Circus Maximus
9 Thwarted By The Dark (Blade Of The Vampyre Hunter)
10 And Atlantis Falls…

This is an album I play when I need a good hale dose of laughter! A chaotic symphony composed primarily of guitars and then completely drenched in cheese and afterward sprinkled with keyboard sounds of ancient and medieval instruments including clamorous war-horns, atmospheric synths, delicate harps, and most of all, boisterous trumpets of every kind. All this combined with a singer that sounds like some funny villain from old He-Man cartoons makes for one ultimately cheesy album! It's not easy taking trying to look at "Battle Magic" seriously to comment on the actual musical quality but I'll try my very best.

First of all, this is an opus that demands a lot from the listener partly because Bal-Sagoth are one of the few rare bands today that put as much focus on lyrics as on the music itself. It's very easy to get bored (or laughed) to death by not taking the songs seriously, but if you give it a chance with an open mind and no particular distaste for cheese, you'll probably grow to like it! With such a high focus on the lyrics and storyline, I was hoping this would be a theme album. It would certainly make a good one, but instead we have a number of different tales ranging from singer Byron's elaborate fantasy creation dealing with the "Hyperborean Empire" to ancient legends like Atlantis, to stories taking place in actual historical events like the war of Rome against the Celts and other barbarians.

The historical, Earth-based, stories actually hurt the fantasy theme because every time Byron happens to take us to a world far away of magic and epic battles he makes sure to plunge us back to boring old Earth on the "Battle Magic" is a hard one to enjoy for many reasons. If Bal-Sagoth are trying to create powerful, historical, timeless epics they've certainly skipped a lesson they ought to take from other keyboard-oriented artists like Summoning, Dargaard, or even Limbonic Art and early Emperor. To make a medieval heavy metal epic they need to create a strong sense of power, intimidation, and energy. That is what makes good metal. Bal-Sagoth lack all of these, this CD sounds like Emperor joking around and experimenting with funny sounds. Bass is weak and the sound is tinny, the trumpets and horns that ought to be powerful and moving somehow turned out fake-sounding and cheesy. Plus the album cover is a complete eyesore, tasteless and childish, much like the album itself.

Bottom Line: I tried my best but this band is just too tasteless and messed up to be of any liking to me. There is definitely musical potential in these guys, but they've chosen a horrible outlet for it.