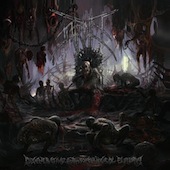 I cannot describe enough how much I absolutely love this album. I'm a huge brutal death metal fan and I've found my fair share of great brutal death metal bands along my musical journey. But this band and this album in specific, it hit different, it changed me. I've never heard a brutal death album in my life that's just as fabulous and great as this one.

One thing for sure is that this album is HEAVY, and all of it is pure relentless heaviness and brutality. This album is appreciated by the fans and the underground, but this needs way more attention than it currently has. Degenerating Anthropophagical Euphoria is a staple and beauty in the brutal death metal genre, people seriously need to know about this album. When you start playing it, a quiet guitar squeal greets you and gradually gets louder, introducing the heavy start to the opener, 'Cannibalistic Postclimax Flesh Consumption'; which is definitely the best track this album offers. The song opens with machine gun blast beats, crushing deep gutturals, and an overall heavy feel. The bass drum along with the guitar tone is what's mainly responsible for this album’s heaviness, and the bass is what glues it all together. Yeah, this would still be somewhat heavy without bass, but it wouldn't sound the same at all.

All of the musical roles each member has been assigned isn't lacking at all, every instrument is straight up, clean, fresh, and present. The drums played by BrutalDave is some of the most mind-blowing outstanding drum work I have EVER HEARD. When I said this album is pure brutality, I wasn't lying. The drums are always blasting, creating little sections and swift fills, filling in every single part of every single song, nothing boring or unfilled. This is some insanely skilled drum work right here. The guitar work done by Ciccio is great, this album has its own unique sound which isn't like most brutal death records, actually. Ciccio is the founder of this band. His style of playing heavily relies of consistent fast-paced chugs, mid-paced strumming, followed by sudden guitar squeals at the ends of pretty much every section he plays on. I will admit at sometimes this can be kind of bothersome and annoying, but it's barley ever, you'll pretty much think about it like once and then not care ever again. His style may be not as special as desired, but once you establish his style in your head, it's amazing, you'll get used to it. I'm not saying his playing is bad, I'm just saying you may be slightly bothered by this at one point or another, but it won't really get to you or matter at all. Anyways, the guitar tone is very distinct. It's deep and solid, yet thin and fun at the same time. The guitar does lack speed and hyperness; the drums take that responsibility. The insanely fast-tempo drumming is what carries everything together and makes it all sound good and natural. This is the band's special formula in their songwriting. Very creative and pleasing! I don't really know how to exactly describe the guitar sound on this record, but I'll just say it's satisfying. It doesn't disappoint. As I've said before, it's heavy, crushing, and relentless. This is Putridity.

Every song is great, they may all sound familiar once you're deeper into the album, but it's not an issue at all. The more and more you listen to this the more you'll understand its greatness and grow to love it. This is brutal death metal; most songs sound identical but it's never an issue for the most part. None of the songs on here are bad, none at all. Some of these songs have small intros consisting of horror and gore samples, and it surely does fit the album well since the lyrical themes are sexually violent and focuses on perversion and etc. The only interlude this album has, 'Wallowing in Aftermath' is a great divider. As I've mentioned before this album is nonstop brutality in every song, so having this horrific heavy interlude to divide everything and take a short break is awesome, you'll just have to listen for yourself. The albums length may be a tad short, but once you listen for yourself you'll understand that the length actually isn't short at all, it's the perfect length for an album like this.

The vocals are guttural, deep, and meaty. Very suitable for this album. You can't have bass-reliant heaviness without some good vocals to make everything even cooler. Good vocal work as always. "Heaviness" isn't truly "heavy" without some bass to provide the backbone. There are parts in the album, mainly in the very beginning of the opener track, where all the instruments stop for a sudden and the bass is exposed for a few seconds showcasing it's presence and greatness, once you hear the bass you'll understand why it needs to be there, and you'll also hear it's great deep and plumpy sound.

This release here never gets old for me. I can listen to it regularly, not an ounce of sickness in sight. When you understand how beautiful this album really is and how it works, and where everything takes its place, you'll feel this way too. One of my most favorite brutal death metal albums EVER, this is iconic.

Degenerating Anthropophagical Euphoria is a whole another level of brutal death metal, this is an adventurous listen. This is different, and different is good. This album seriously has no flaws. Needs more attention, and we all need more Putridity material similar to this. Great job guys. Thanks for this.

Solid release that doesn't fail in the slightest.