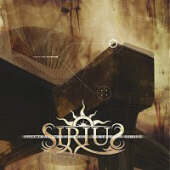 Ever since Mayhem put out the controversial "Grand Declaration of War", there has been a non-stop onslaught of spacey/electronic injected black metal coming out of Europe. "Spectral Transition - Dimension Sirius" is definitely one of the best. This Portuguese band will be a powerful force in the coming years. This album is much more extreme than their last. While they are not the first to try their black hearts in this style, they do what they do very well.

The music itself reminds me a lot of newer Behemoth, but with a thicker sound and a lot more keyboards. The keyboards are performed tastefully, without watering down band's assault. The atmosphere created by the guitars and drums are very cold, murderous and precise. The drums sound like they are triggered so they have that mechanical "clicky" sound, but still sound powerful. Where Sirius really shines is their use of the keyboards to offset the mechanical music. The keyboards have a very airy, sweeping sound, much like Emperor's "In The Nightside Eclipse". The aforementioned bands influence is obvious on this album, but that is not bad. This is maybe what “In The Nightside Eclipse” would have sounded like of it was recorded a decade later. Clocking in at just over 50 minutes, this album is definitely worth the money. The songs don't immediately sink in with the listener, the album really needs a few spins before it reveals it's charms.

This album definitely pushes the limits of the current Black Metal in scene. It’s a cold, calculating album that has many surprises along its tour of the pale spheres of the darkened night sky. And there are many guest musicians that lend their talents to the album, including former Emperor members Faust and Samoth (maybe that explains the 'Night of the Graveless Souls' riff in 'Abstract Eerie Corridors').

Bottom Line: If you like newer "space" Black Metal, this is definitely worth a try.