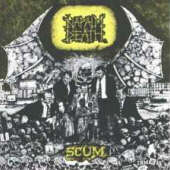 I never really cared that much at all for this album aside from standout tracks such as 'Multinational Corporations', 'Instinct Of Survival', and 'Scum'. I definitely prefer From Enslavement To Obliteration, and all the albums following it over this one. Scum isn't bad, in my opinion it's just flawed in some areas and not as colorful as the band's other albums.

This album is supposedly the "true pioneering force of grindcore", and I think that it's a pretty solid start for the genre. But my ONLY issue is that it's half good, half "what the hell happened???....."

Basically, Side A, the first album of this album; is great. It's full of energy, the guitars have a great sound that maintains a nice balance of relentless grinding and the ability to hear actual notes and melodies being played, and the drums have a cool, poppy, fulfilling sound. It isn't too solid nor too soft, it's just right. On the other hand with Side B, the second half; it's all fucked up. It's drastically different from the first half of the album. The guitars have lost their great sound, it instead sounds like some damn random gray wankery for the hell of "grindcore". It's sloppy as well, but pretty much the issue is that the guitars sound entirely different compared to the first half, I just don't understand why this happened. It sounds like some "brootal" demo or something.

Sure, the second half is quite some grindcore, but it's a drastic difference in comparison to the first half. You're just chilling and enjoying the music, and as soon as "Life?" come on, you immediately notice the change, and it confuses you, leaving you thinking something along the lines of "uhhhh...what just happened? It's not that great anymore." The second half is definitely listenable, but compared to the first half it aint shit. So much greatness has disappeared.

Pretty much what I'm trying to say is:
Side A: Awesome iconic grindcore that's fun, awesome, catchy, and has personality.
Side B: Sloppy, messy, demo ass material, wank-ish, gray noise grindcore for the hell of it.

This issue could have easily been prevented, I don't know why an entire half of the album has to sound different and not as good compared to the other, but oh well. If it all sounded like Side A I would have absolutely ZERO issues with Scum at all. This is definitely a great and iconic album, but one entire other half is different from the first half. I personally recommend From Enslavement To Obliteration, it's much better and it doesn't change up it's sound. Scum is good, but it's half bland crap that appears out of nowhere, unfortunately. I'd give this a very high rating if such a drastic amount of the album wasn't the bad part, I don't want to give this such a low score that is 65%, but I have to since it consists largely of the not good side.

During the last half of the Eighties death metal's most extreme variation, known as grind(core) was spawned by a few sick kids from Britain known as Napalm Death. In the process of creating a sound that takes even death metal to its very extreme, the band decided to eliminate all harmony or melody and created a genre of music that thrives on the deconstruction of music (if it can be called as such) itself. While original and innovative bands are always forerunners in my music tastes, these guys are, hands down, the most horrible band I have heard in my life.

Napalm Death have taken the concept of extreme music further than it was even meant to be taken. It's like they are deathly afraid that someone might accidentally mistake them for musicians, so every time a half decent metal riff starts (like on the title track, or 'Instinct of Survival') the drummer makes sure to break into a pointless blast-beat section that turns the song into drowned out noise. The guitars are so low that one has to be amazed they're getting a sound from their strings at all. A dark, slow churning riff will sometimes make an appearance, complimented with totally low tuned drums that give it an unearthly sound, but again, this band seems to think that it's mandatory to destroy anything that sounds like music for more than 10 seconds, thus bringing the overall composition value of the album to a zero.

The lyrical value here doesn't raise much further from a garbage container either. To an average song length of 30-seconds we get an average lyric length of 8 lines, these being rebellious nonsense about corrupt politicians and corrupt corporations, earth pollution, and other filthy matters. From the booklet pictures these guys don't even look 18, so who are they to preach to me about the ways of the world that they likely know little about. The vocalist, or the two vocalists, rather (the first one left halfway during the studio session, they hired another one that sounds completely identical) are utterly devoid of talent. This is not an angry yell, a guttural growl, or a rasp, this is some dude giving birth to an elephant and sounding very close to death. Absolutely tasteless.

Bottom Line: The first and most likely worst grind album in existence. The most horrible musical recording I've ever had the displeasure to hear.