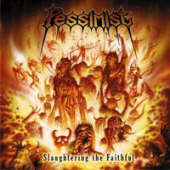 Out there in that underground death metal world, Pessimist has been around since 1989. It’s still quite obvious why the band is underground, even today. “Slaughtering The Faithful” is pretty much an all out brutal death metal storm of monotony. There isn’t even once minute of material here that can be considered innovative or new. Honestly, if I want a record that is sick and brutal, and that the songs all sound the same, ill stick with Krisiun.

Pessimist play that brutal death metal we all know too well. They do it with not so decent musicianship, but really it’s not that bad. If in over ten years they couldn’t get it right, I don’t think there is much hope for these guys. “Slaughtering The Faithful” moves its way through nine tracks of music that sounds exactly the same. First off, the drumming does absolutely nothing to help the album. He can play fast, sure, but I don’t think he even understands the concept of variation. For him, it is a constant race to play as fast as possible. The guitarist plays riffs that are somewhat technical, but there isn’t anything on this album to be amazed by. If I heard a great riff on here, I would have to listen to the entire album again to find it because I wouldn’t even know what song it was on. I suggest the guitarist learns to do a bit of experimenting on the guitar and to get off the idea of making riffs that are extremely heavy. Thankfully, the band did one thing right. The vocalist is fairly low in the mix. There is nothing special about his vocals though. They are growled exclusively, and he does nothing to stand out from the rest of the vocalists in the scene. Lastly, I don’t really know what to say about the bassist. He’s lost in the mix of boring wall of noise created by the rest of his band members. The band has absolutely nothing going for them on this album.

The funniest thing about the band besides their music is that they are one of those bands that are stuck on the idea of being “brutal” and “evil”. With creative song titles such as ‘Baptized in Blasphemy’ and ‘Resurrected Torment’, one can only guess where the band went wrong. The album cover shows demons in the depths of what can only be perceived as hell. Oh, I’m scared.

Bottom Line: Being a big fan of death metal, I was quite disappointed by this band. If I want the same repetitive song reconstructed nine times on a CD, I’ll find one of the much better bands out there to listen too. “Slaughtering The Faithful” is an utterly pointless record that serves best as a coaster. Severely not recommended.