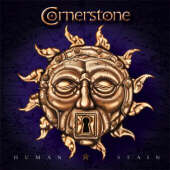 Yee-ha folks! Jump on your ponies and holster your six-shooters and peacemakers! Get ready for some power metal country style! Ok I didn’t really mean to turn half the music loving population away with those opening couple of lines, but Cornerstone’s second album; “Human Stain” has some distinctive boot scootin’ melodies that really do remind me of a few country and western licks. The opening of the track ’Some People Fly’ has some serious tuneage that you would not find out of place in a country festival.

Cornerstone is a two-piece band comprised of Scottish singer Dougie White and Danish bassman Steen Mogensen, both have some good experience within the music scene and within “Human Stain” they manage to ignite some hard-hitting influences from all around the world. Noticeable influences I can recognise include acts such as Dire Straits, Dio, Thin Lizzy maybe and perhaps other catchy rock acts. The track ‘House of Nevermore’ reeks of Dire Straits keyboard mayhem and rekindles some fond memories for me as a younger tacker.

One point that must be stressed is that Cornerstone is certainly not metal, and should not be thrown in with some of the sewerage that does get deposited in the power metal rubbish bin. Cornerstone are a ridiculously diverse and overly talented rock band, and I’m sort of wondering what they are doing on a notorious metal label in Massacre Records, more non-metal distribution in the form of other musical genres would perhaps spread the word that these rockers are no doubt hoping will occur.

All in all a great follow second album from Cornerstone, though metal enthusiasts may not find much to toy around with, music lovers in general should appreciate a fine selection of tunes if they hear it, and “Human Stain” is no exception.

Bottom Line: Groovy stuff. I really do like “Human Stain” despite their non-metal features. If you are a fan of the older more retro metal and are wishing for a band to bridge a gap between your old time favorites with a bit of new edge, than Cornerstone would be a good bet. Worth a look.