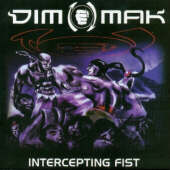 Dim Mak are supposedly this force that play an “untouchable style” of ‘cobracore’ and metal. Also, they take this style of theirs to “new levels of endurance and discipline”. This is all according to their website. Well, if what they say is true, I must say that the listener better share the same endurance as the music does because it’s one boring ride. The fact is, what they claim to be isn’t true at all. Their style is typical, and it’s hardly disciplined. “Intercepting Fist” is overall is a bad album with only a few... very few barely interesting ideas.

Through multiple listens, I was often lost in landscape of music. All the tracks are very similar in taste. The album opens up with 'Phoenix Eye Fist', one of the most monotonous and boring tracks I’ve ever had the displeasure of listening to. It doesn’t stop there though. The generic death vocals overlying their death metal style riffing is all over this album. The album only gets mildly interesting on half way through on 'Den of the Avalanche Dragon', which is then totally ruined by the repetitiveness. But of course after that, we’re back to more boring ideas that have been used and abused far to many times. The only real credit I can give the band is to their drummer. He’s tasteful and doesn’t over utilize any particular drumming techniques.

So that brings us to the musicianship of the band. As I said, the drummer does a nice job of being tasteful. But I’m afraid it all stops there. The vocals are pretty horrible. They’re just completely boring and generic. There is nothing interesting about them at all. The guitar playing is decent but the material is so horrible it doesn’t even matter. There is really not much that is interesting in this area of the band.

Bottom Line: I don’t know what the hype over this band is. I’ve seen quite a few praises but the fact is there is no reason to even bother with Dim Mak. Their music is the music we have all heard a countless amount of times, and they’re doing nothing noteworthy with it. I say pack it up. With two albums out already, I doubt the third one will show any progression.