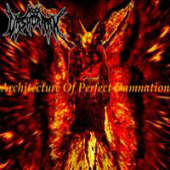 Urshurark hail from Italy, the home of not so many known metal bands. Playing a mixture of black, thrash, and death metal, I wasn’t particularly impressed by this band. But, there were rays of hope gleaming through the music, which made the listen not half bad. “Architecture of Perfect Damnation” is the bands first output, and shows us that the band may have a future ahead of them.

One of the most important things about the music of Urshurark are the keyboards. While a bit overpowering for the rest of the band at times, without them the music would be a step behind. Underneath the smooth keyboards is a layer of fast drumming and black metal guitar playing. I can’t really stand the drumming, since it was done with a drum machine. The double bass, which is used way more than needed, sounds like someone tapping their pencil on a desk at a very high speed. It’s just far to annoying for my tastes. I assume that the band will fix this next time, though. The guitars are concise and to the point though, which I like. While often a bit to similar, they often come out of the music to bring the listeners attention back, which may have been lost by the some-what repetitious structures of the song. That’s really the last bone I have to pick with Urshurark. The songs in general are anywhere from seven to eleven minutes. I enjoy long songs, but only if done well. If the band were to take their ideas and construct them better, the songs would definitely be a lot better.

Bottom Line: This is only the first offering from the band. If the band continues on and realizes where they need to improve, I see them having quite a nice future at hand. But for now, this album isn’t anything to fret over.