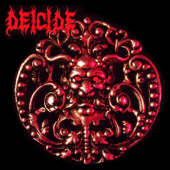 From just 30 minutes of audio, Deicide unleashes their most evil and demonic release ever! With backup screams that makes Glen Benton sound like the antichrist, the most original and unrelenting musical genius comes about. I’ve never heard a Deicide album sound as so evil in its’ entirety. Not even Legion can top this death metal release that deserves utmost praise. Such original riffs to the songs featuring solos that are remarkably fast and furious. The lyrical concepts have always been the same by Glen, complete and utter blasphemy without any letup.

The Hoffman brothers on guitars here featuring solos that are ferocious. It’s difficult to distinguish whose solos are who’s since both members share a similar amount of talent. In regard to the music, you have time signatures that are all over the place. Down picked riffs then enter heavy tremolo picking which gives the album diversity. Chords galore alongside Glen’s most Satanic vocal efforts within their entire discography. Glen admitted to doing a lot of heavy drinking before entering the studio to record this album. But that’s obligatory.

What counts here the most is the music. With so many passing years growing worse and worse, their debut and Legion are the 2 most amazing Deicide albums in existence. But on their debut, there is complete evil with vocals that screamed out its utter brutality alongside backup studio effect screams with it. Every song on here is entirely original in regard to the riffs, the solos and the overall musicianship. Songs like “Lunatic of God’s Creation”, “Sacrificial Suicide” and “Dead By Dawn”, these dominate the whole album. But every song is good no matter which one you choose to dissect and analyze.

Utmost intensity on every song and one song about Mr. Jones called “Carnage In the Temple of the Damned” which opens up history of blasphemy in the making. The ideas and song structures make Deicide what they were during the early days: a blasphemous, unrelentingly evil and demonic death metal band that used to have such utmost talent. Be it age, laziness in songwriting that they became over the years, their debut is one of the strongest outputs to date. The music is without a doubt so extreme and brutal with everything that you could massively tell that these guys meant business for Satan.

Their unique style of riff structures in each song kept this album flowing with so much intensity and adrenaline. Nothing could outwit this one. There is no comparison to this one that holds true for the band that that used to really dominate the death metal genre. Amazing how much they slowed down over the years and lost that total progression as musicians. Sorry to hear such a talented death metal quartet go to pieces. But what matters here is their debut and how much intensity involved in its’ making. A 30-minute death metal onslaught of precision. Don’t ever leave this one out of your death metal collection!