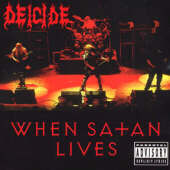 Type: Live
Release Date: 1998
Label: Roadrunner Records
Genre: Death
1 When Satan Rules His World
2 Blame It On God
3 Bastard Of Christ
4 Childern Of The Underworld
5 Serpents Of The Light
6 Dead But Dreaming
7 Slave To The Cross
8 Lunatic Of God's Creation
9 Oblivious To Evil
10 Once Upon The Cross
11 Believe The Lie
12 Trick Or Betrayed
13 Behind The Light Thou Shall Rise
14 Deicide
15 Father Baker's
16 Dead By Dawn
17 Sacrificial Suicide

Deicide-the world's infamous Satanic death metallers here offer us a good hour of hard-hitting, complex, generic extreme metal. Sure, every song sounds the same, the singing is absolutely horrible, the song titles funny and unoriginal, but this is some fun shit to crank up, get drunk, and 'bang to!

To a Deicide fan (or an intoxicated metalhead) this would surely have been one kick-ass live show, but putting it down on a recording greatly decimates the energy and excitement that surely emanated from the stage that night. The playing is top-notch, very tight and barely any mistakes. The guitars are generally monotone but the lead has a great sound that adds kind of a dark atmosphere as well as something to keep the interest of those with short attention spans. The drum beat on 'Oblivous to Evil' and 'Believe the Lie' as well as the guitar shredding are very catchy and get your head bobbing, though the others are greatly burdened with pointless blast-beats and uneven time signatures that get very annoying, very fast.

This is not an album that keeps you interested. For a live show, I found it quite irritating at the lack of stage excitement and interaction, the singer barely says two words in the whole hour and it gives me the impression of the band doing chores instead of playing songs they enjoy. Each muddy track sound the same as the one before it, and not being a fan of Deicide, I don't know if this is also the case with their studio albums. For a mix of songs spanning their entire career, there is very little sound progression and improvement apparent, in fact, the song announced as "from our first album" sounded much better to my ears than most others.

A point up for the lead-guitar work of Eric and Brian Hoffman, and point down for the vocals of Benton, the rest is mediocre, unoriginal death metal.

Bottom Line: Just one of the many bad and generic death metal albums out there, helping to give the genre a bad name that it is already struggling with. Aside from hardcore Deicide fans, I can't imagine who would ever buy this.