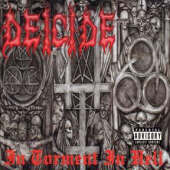 Type: Full-Length
Release Date: 2001
Label: Roadrunner Records
Genre: Death
1 In Torment In Hell
2 Christ Don't Care
3 Vengeance Will Be Mine
4 Immanent Doom
5 Child Of God
6 Let It Be Done
7 Worry In The House Of Thieves
8 Lurking Among Us

Deicide used to be one of the worlds premier death metal band, with such undisputed classics as “Deicide”, “Legion”, and “Once Upon The Cross”. The key idea here is used to be. With their latest album; "In Torment In Hell", Glen Benton and company have hit absolute rock bottom (I hope!).

Last year I attended the Marduk/Deicide tour, and I remember Benton saying "We have a new album coming out soon, and I promise you it is going to be really brutal old school shit, like the first two albums!" After the above statement, I was looking forward to hearing “In Torment In Hell”, and when that day came, disappointment doesn't even come close to what I felt, more like nausea!! The album opens up with the worst intro ever used on an album, then starts chugging away into the boring title track. This track pretty much showcases what the album as a whole has to offer the listener... absolutely nothing!! Much like their previous pathetic “Insineratehym”, this album does not contain one track worthy of the once mighty Deicide name. It’s as if they have totally run out of any conviction for the music they are playing. There isn't one riff on here that stands out, when nearly every one of their older songs had at least one awesome riff in it. Benton's voice has lost its vicious sting (check out his pitiful "oooh, oooh, oooh, owwww!!!!" yell in the middle of ‘Vengence Will Be Mine’, it sounds like a 3 year old getting a shot at the doctors office!!), the Hoffman brothers have actually regressed in their axemanship, and Steve Asheim's drumming sounds boring and lifeless, with absolutely nothing creative going on. It's as if the band is trying to be a parody of it's former self. Yes, Deicide has completely lost their magic. Where is spite, and energy that this band once had?

This album is actually worse than “Insineratehym” in that they had a chance to redeem themselves after that flop, but didn't even improve in the least. In general, the music showcased on “In Torment In Hell” is death metal at it's very worst: uncreative, predictable, clichéd and completely stale. To those of us who know what a powerful, expressive and all around amazing genre death metal can be when it's done well, this album is a spit in the face. A good way to describe it would be "Bubblegum Death Metal". This is probably the worst death metal album I’ve EVER heard. The best part of this album is when it stops insulting the listeners intelligence and ends.

Bottom Line: If you respect your ears and stereo at all, do whatever you can to avoid this album!!! Don't even except it as a gift, don't even use it as a coaster as it will surely tarnish your furniture.