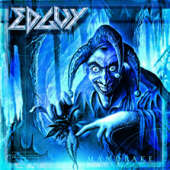 Type:
Release Date: 2001
Label: AFM Records
Genre: Power
1 Tears Of A Mandrake
2 Golden Dawn
3 Jerusalem
4 All The Clowns
5 Nailed To The Wheel
6 The Pharaoh
7 Wash Away The Poison
8 Fallen Angels
9 Painting On The Wall
10 Save Us Now
11 The Devil And The Savant

Edguy is a German power metal band that is featured within the same vein of pompousness as Sonata Artica and whilst better than Sonata Artica, they both do not possess the same mastery over their metal that innovative bands like Rhapsody do. However, do not make the mistake of thinking that Edguy are not brilliant musicians, because that line of thought could not be further from the truth. The pit-fall that Edguy (and Sonata Artica) fall into is a willingness to not expand and open their horizons. I mean we have all heard Stratovarious before, why must we listen again and again and again?

Tobias Sammet of Avantasia-fame created a brilliant album in “The Metal Opera” (all be it with some help from some other celebrity power metal folks). It was a stand out album and definitely worthy of album of the month at Metalbite.com. Why in the hell did he come together with the rest of Edguy and put together such a disappointing album in “Mandrake"? Edguy as a collective possess an extraordinary amount of talent, yet let themselves down as a band with writing tired music with boring and unimaginative chorus/choir sections.

It is ridiculously frustrating to see Edguy, who have the potential to strive and reach for the power metal throne, write some pretty mediocre stuff. If Edguy were some untalented and worthless power metal band I wouldn’t care, as “Mandrake” is not an overly bad album, it is just sad that Edguy have not fully realized their potential.

Bottom Line: If it was most other bands, I could probably get away with recommending this album, but being the talented outfit that Edguy are it is extremely hard to say this album is worth a look because of the frustrating abilities of these guys. Still if you are craving more “Silence” from Sonata Artica than give this album a look. Very, very average record from a very, very above average outfit.