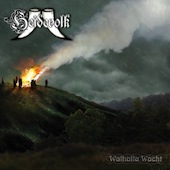 Usually I don’t care a lot about Viking metal, but Heidevolk’s album from 2008 caught my attention due to three reasons. The first one is the opener. 'Saksenland' combines vigour, melody, velocity, strength and folklore in a fascinating way. Powerful guitars are accompanied by a voluminous voice and occasionally many-voiced background choirs. The song marks a glorious beginning and moreover it is fully aligned with the atmosphere of the album’s great artwork. Secondly, I like the title track very much because of its catchy vocals and the strict and pretty merciless guitars that follow the calm beginning. The third reason is called 'Zwaarden Geheven'. This late highlight shines with a belligerent beginning and drums that pelt down like a thunderstorm. Nevertheless, the band has also kept an eye on a coherent melody again. However, the song’s degree of harshness is remarkable.

What about the rest of the album? Well, it explains to me why I normally leave the Viking scene alone. Generally speaking, the songs are not bad, but sometimes they sound like I am on a medieval market. Fortunately, some vehement eruptions are integrated and I appreciate them a lot, because the Dutch crew knows its metier. Be that as it may, guess you know the usual ingredients of Viking metal (horns, tin whistle, male choirs and so on) and here you will find them all. In addition, the fiddle at the beginning of 'Wodan Heerst' reminds me of Skyclad, but this is also a slightly ambivalent association and the exceptionally sleepy vocals of the first verse do not make things better.

A positive feature is the production. The album sounds full, warm, heavy and transparent. It gives room for all musicians to prove their skills and I have no doubt that all of the six upright fighters add value to the compositions. This does not mean that no song falls through the net. The archaic chants 'Hulde Aan De Kastelein' and 'Naar De Hal Der Gevallenen' leave a vapid impression, but they appear rather as intermezzos than as wholesome tunes. Apart from these little defects, one can feel that the songs and the entire album (artwork, booklet) were forged with dedication. The well thought out lyrics and the liner notes in the booklet speak a clear language.

I'm sure that Vikings can use this album for their next drinking session and more – and they can add some percentage points to my rating. From my thrash and black metal-imbued taste Walhalla Wacht is a really good album, no more, no less. And if someone needs a fourth reason to give the album a chance, just listen to 'Het Wilde Heer'. It suffers slightly from the presence of the fiddle, but here the outstanding vocals that characterise the entire work come into their own excellently.