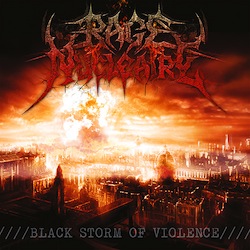 One needs to only look at my reviews to see that I’ve only reviewed a handful of black metal albums since I started reviewing albums on this site back in 2006. Not my favorite sub-genre, but when done well (Infernal War’s “Terrorfront” and Marduk’s “Rom: 512” immediately come to mind) it’s really hard to get me to stop listening to a brilliant album.

Let’s not jump the gun, however. I am not saying that Black Storm of Vengeance is a brilliant album. But it certainly is an exceptionally good one.

I’ve been a Cryptopsy fan for many, many years. I’m talking since the "None So Vile" days. I’ve followed them through their ups and downs and when Lord Worm left, I kept an eye out for what he would do next. Even all the way back in the late 90’s, he would talk about wanting to get a black metal band together. And after "Once Was Not", that’s exactly what he did.

Unrelenting Fucking Hatred had its moments, but for the most part it went under my radar. I guess I was too caught up in listening to other albums. It never really struck that nerve for me and went unforgotten. Listening to it now again, I can see why. The song writing on that album, as well as the production, is mediocre at best. Thankfully the band didn’t hang up their guitars after that and gave it another shot. And what we have this time is Black Storm of Vengeance.

Straight off the bat, this album sounds about a million times better than their first one. Tight, punchy drums dominate the mix, as well as Lord Worm’s tortured screaming. Everything sounds a lot more focused and with purpose, and truthfully, it sounds great. I absolutely love how Fredrik Widigs’ kit sounds on this album - so much so that I wish this was how it sounded on the more recent Marduk albums as well. Tight, accurate, machine gun drumming dominates this album, and Fredrik gives a stellar performance throughout. There is not a dull moment on this album, drum wise.

The mix and mastering are also very well done. The album like I said previously is dominated by the drums, but that’s not a bad thing, as it just seems to fit. You can even hear the ride cymbal clear as day, which is something that I love. The guitars are there but just enough to be here - they don’t really get in your face too much, though they do provide a formidable base to all the madness being unleashed. In some parts the keyboards are even higher in the mix than the guitars, which makes for some very interesting soundscapes.

There is not a weak track on this album. It sets out to do one thing - violate your eardrums. And it does so in spades. Lord Worm’s vocals are a treat, as are his lyrics. While they are not quite as genius as they were on Cryptopsy albums, here they are no slouch, either.

“Broken, but forever young
We'll die forever in photographs
their nooses stilled our praying tongues
and now our ashes are our cenotaphs
How vast is this martyrium?
How much bigger will tombs become?
Where we go, may you follow”

The final song on the album, “Black Storm of Vengeance” is in my opinion, a masterpiece. The guitars never really make much of an entrance - it’s more drums and keyboards running the show. It seems that the entire buildup of the album - what the band really wanted to say - finally explodes in your face on this track. After the 3-minute mark, it’s just full on insanity. The blast beats are never ending - on and on the go - laying ruin to all in path. Lord Worm pulls out legit 30 second screams, which sounds like the nastiest, tortured, harshest screams from the depths of hell itself. All while floating on a gloomy keyboard soundscape, with Fredrik unleashing complete merciless annihilation upon his drum kit.

Not for everyone, perhaps, but if you’re in the mood for some avant-garde black metal, then don’t miss this. It’s 45 minutes of masterfully crafted black metal which makes you feel completely violated and enthralled by the end.