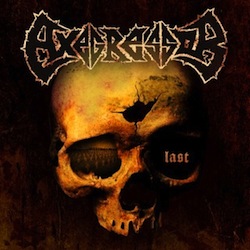 I am very interested in Axegressor's work since I have heard the fantastic self-titled band anthem that was published on their thrilling debut. Their second album was even better than their first output, because it was filled to the brim with lethal weapons. I was therefore very delighted that they went on and released a third album called Last. Initially, I was afraid that it could actually be their farewell full-length because of its title. But meanwhile, they have already published the fourth album... Forgive me for being a scaredy-cat.

The strapping quartet offers nine tracks with a running time of 36 minutes. This alone smells like old-school, doesn't it? And it's true, the Finnish aggressors are definitely old-school, they are ugly and make no compromise. The guitars and the almost omnipresent bass, which gives the production an extra-dose of heaviness, characterize the intense music while the tones of singer “Johnny Nuclear Winter” (these Finnish names are really strange…) still sounds like the noises of an injured animal on the run. Don't get me wrong, he can take that as a compliment. The backing vocals are used in a targeted manner and they sound strong, too. All songs are running more or less in the same vein. They are fast, powerful and mighty without being predictable. Axegressor act with an exceptional degree of aggression and therefore they will surely energize every fan of rude thrash metal. Just enjoy the ultra-fast parts of "Command to Last" as well as its brief galloping section. Generally speaking, if you expect a minimum of sweet melodies or harmonic singing, you are not in the right ballpark. May I dare to say that, for example, some short acoustic parts would have increased the variety of the album? No? Okay, then I'm quiet. (And, in all honesty, variety is no end in itself.)

Admittedly, it is difficult for me to figure out the best songs. The album works as a whole. It hits you like a lasting act of violence that is used to demoralize you. At the latest now I have understood what Exodus preach for roughly three decades. Axegressor celebrate "good friendly violent fun" - naturally without touches of humor according to the general understanding. It goes right the other way around; their riffs are dry to the bone and move constantly forward. The song title "A Fistful of Ignorance" symbolizes their attitude in a very precise manner. Perhaps the solos could leave a greater impact, but that remains negligible due to the strong overall impression.

You do not have to like this bullying album, but no one will be able to claim that these guys did not do their job properly. A Finnish army in rage always makes trouble and Last does not lack energy, enthusiasm or pressure. Moreover, the technical skills of the musicians are first class and their passion and integrity is beyond doubt. Thus, the cover motif (heavy metal skull number 21.341, I guess) features the only vapid detail. Fans of Battery, Terrifier or early Destruction are summoned to get a copy.