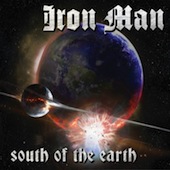 Buy on: Bandcamp
Type: Full-Length
Release Date: September 30th, 2013
Label: Rise Above Records
Genre: Doom
1 South Of The Earth
2 Hail To The Haze
3 A Whore In Confession
4 The Worst And Longest Day
5 Ariel Changed The Sky
6 IISOEO (The Day Of The Beast)
7 Half-Face / Thy Brother's Keeper (Dunwich Pt. 2)
8 In The Velvet Darkness
9 The Ballad Of Ray Garraty
MetalBite on YouTube
MetalBite on YouTube

Coming off a string of EPs and live releases, Iron Man had reached their most prolific point by the early 2010's, when "Screaming" Mad Dee joined on vocals. I'm particularly impressed by this late chapter (trust me, I wish it didn't count as "late") of this Maryland staple, because as the culimating effort of this era, South Of The Earth, proves, all the pieces needed to stay highly relevant in the doom scene of the time were there. It doesn't top their first two excellent Hellhound albums from 20 years prior, but it also circumvents the need to. Compared to those albums, it deviates from Al Morris' usual three-fourths 70's Sabbath meets one-fourth 80's Sabbath approach here and there, but sacrifices none of his trademark grooviness, or his amazing guitar tone.

Upon first listen, you'll be able to tell there's a palpable (but still relatively minor) southern/sludge feel on this album, enhanced by Louis Strachan's bass style (as well as its presence in the mix) and Dee's grittier, hoarser vocals. The entire first half of South Of The Earth is particularly reminiscent of a classic doom/heavy metal band taking subtle queues from the best of modern stoner/sludge, and if this sounds like a winning formula, that's because it absolutely is. Maryland doom has always been adaptable and focused on musicality first and foremost - bands of the scene can range from being highly accessible for most heavy rock fans, to being rather burned out and despairing. The opening title track here does both really well, and is perhaps better for converting someone to hardened, gritty doom than the typical culprits like Saint Vitus (though I have always felt Morris is a far too overlooked pioneer of American doom for how indispensable his works truly were).

'Hail To The Haze' reaches a chorus that seems similarly brooding, but during its verses, it rides on a rhythm section that comes off a bit like the first couple Motörhead albums. This is perhaps an unlikely comparison for a doom metal band, but it nonetheless resonates with me - when I showed a metalhead friend of mine who's more into black metal and the dissonant side of tech death a lot of the American doom classics, he did say that a lot of it comes of as "biker." I've always gotten that impression too, because this style is badass by all accounts. I like how this "Hellhound doom" style is less influenced by the textbook NWOBHM/traditional heavy metal sound of the 80's than, say, the epic heavy/doom sound. It's much more inspired by 70's heavy rock/early metal, and the acid rock before it, but is still generally very heavy sounding and not too slow either. Now, I don't need to tell you this if you've heard Pentagram's 1970's recordings, because that much is obvious. However, what you might not have extrapolated from this point is that what you get with those kinds of musical sensibilities is a more free feel - this means they can conjure Sabbath as per usual, Motörhead if they feel like it, and traces of the sludge/stoner sound as I mentioned earlier.

'The Worst And Longest Day' might initially seem to be a standard slow-paced doom metal song, but this is where Iron Man, particularly the lineup here, is so many steps ahead. Morris hangs back a bit in the riff department in this song, but this works a little better than it would on Black Night due to the very strong clang of Lou's bass present here, and most notably due to Dee's really, really foreboding, not-so-clean singing. "Screaming" Mad Dee is an amazing doom metal vocalist; his gritty style comes off kind of like Scott Reagers and Lee Dorrian combined into one, with at least as much charisma as Bobby Liebling's voice, too. Anyway, after the tense overtone is set, Morris belts out that solo style he was really renowned for and it leads to an awesome jam to conclude a doom metal song like this. Marvelous first half.

'The Day Of The Beast' comes back swinging, however, more of a return to the faster-paced 90's Iron Man. This song further drives home the power of this band's final lineup, what they can do with the faster-paced, more athletic traditional doom approach. 'Dunwich, Pt. 2' has an intro and first half that feels almost too close to stoner/doom with that droning, in-and-out-of-focus kind of feel, but then when you remember this is Iron Man's Rise Above album, fine, whatever. It's also still way heavier and groovier than most stoner/doom, because after all, Al Morris would never let his guitar work become that tame and ineffectual. Not at all.

South Of The Earth is a really complete package of an album, classic doom metal that I do think fans of sludge, groove, and stoner will thoroughly appreciate. It's also interesting for this reason and that's without even bringing up some of the peculiar song titles here; I shortened a couple of their names when discussing them. I actually wonder what would become of it if labels like Rise Above eventually acquired more legacy doom acts that they themselves did not initially get off the ground. It'd sound interesting. On the topic of legacies, though, Alfred Morris III's will never, ever be forgotten and in fact I hope his impact only continues to grow over time. If you want a good companion piece to South Of The Earth, I highly suggest checking out what the other guys who played on this album are doing in Spiral Grave now. Doom remains fresh to this day!