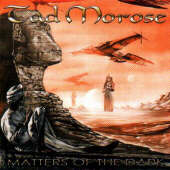 Type: Full-Length
Release Date: 2002
Label: Century Media Records
Genre: Heavy, Power
1 Sword Of Retribution
2 Matters Of The Dark
3 Ethernal Soul
4 I Know Your Name
5 In The Shadows
6 Another Way
7 New Clear Skies
8 Riding The Beast
9 Reason Of The Ghost
10 The Devil’s Finger
11 Don’t Pray For Me

Admittedly, I’m not the biggest fan of power metal, except for a few standout bands. So, that is why I was pleasantly surprised when I came across Tad Morose’s latest offering, “Matters of the Dark”. I was surprised that a band as good as these guys could go so unnoticed and underrated in the metal scene. The bands of style of power, thrash, and melody is very convincing to even the most skeptical of power metal.

Not knowing what to expect, I was hooked from the very first start of the album with 'Sword of Retribution', with its excellent riffs and a solo that made me rewind to hear it again. The rest of the album follows the same suit, thankfully. While all staying in that same suit, they aren’t all identical. The title track, 'Matters of the Dark', has excellent riffs that just make you want to bang your head. The two closing tracks, 'The Devil’s Finger' and 'Don’t Pray For Me', are really great and hold a lot of diversity, and definitely act as a great closing for the album. They end the album strong, instead of the whole thing starting strong and dying out. 'New Clear Skies' has excellent groove to it, while not seeming out of place. In fact, the whole album has a really nice groove to it. Ultimately, the entire album has seamless transitions, whether it be verse to chorus, song to song, or whatever else. Tad Morose does an excellent job, sounding similar to Jag Panzer, Nevermore, Dio, and Lefay, while still retaining a sound of their own.

The musicianship of the band is great. I really enjoy vocalist Urban Breed. He does a nice job fitting with the melody, and is not annoying by going to high, or doing an unfitting style of death or black. The two guitarists, Christer Andersson and Daniel Olsson, do an excellent job with song writing and their playing ability is fantastic. The rhythm section definitely does a great job, instead of just being there for the sake of being there.

Bottom Line: Tad Morose has the composing ability, the energy, the musicianship, and the experience to make an excellent album. Definitely underrated and under appreciated within the scene, I hope that this album can shed a little bit more light onto the band for people who haven’t been exposed to them.