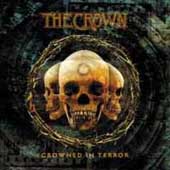 Type: Full-Length
Release Date: 2002
Label: Metal Blade Records
Genre: Death, Melodic
1 Introduction - House Of Hades
2 Crowned In Terror
3 Under The Whip
4 Drugged Unholy
5 World Below
6 The Speed Of Darkness
7 Out For Blood
8 (I Am) Hell
9 Death Is The Hunter
10 Satanist
11 Death Metal Holocaust

Even after the dust settled from Deathrace King, I never realized how apropos the name The Crown really is. Now the kings of all that is intense are back with raging depth and voracious sound in their latest release.

This album is loud as hell. Lots of albums are as well, but unlike the masses, Crowned In Terror has a sense of depth and three-pronged whipping precision that will strike you in many places at once.

The rhythm section alone could bore a hole through the earth. Faster than a jackrabbit on crack and heavier than a pile-driver, the only drawback here is that this rage machine can occasionally drown out the ripping six-stringers.

Marko and Marcus burn well patterned welts on you before you can blink with dynamic and refreshingly varied styles resulting in uniquely identifiable tracks. This ability to make each song a separate entity is often a skill that is grossly under-dispersed in most extreme metal bands. Although there are times when the guitars can sound on the verge of being out of control, those times seem to fit the music very well as demonstrated in some of my favorite tracks Speed of Darkness and Out for Blood. The creativity and diversity shown by these two really push this album over the top.

Our man Tomas utterly destroys with his delivery on the mic. While many people may concede to the point that death screams like those of The Crown and The Haunted can be and are often easily replicated in many bands, it is that fine point of delivery that makes the difference; the timing and infused intensity make for a blazingly fantastic performance. It’s that delivery which will make the hair on the back of your neck stand up when listening to tracks like the insta-classic Death is the Hunter.

While the music played here doesn’t rock the scales of originality, the deft intensity and propensity with which The Crown assaults the listener cranks turns all the judgment dials up a few notches.

Bottom Line: It makes my nipples hard! When this album is unleashed, come hell or high water, you’d better be on it.