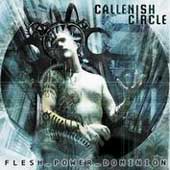 Type:
Release Date: 2002
Label: Metal Blade Records
Genre: Death, Melodic
1 Obey Me…
2 For What It's Good For…
3 Witness Your Own Oblivion
4 Take Me Along
5 Bleeding
6 Your Final Swansong
7 Suffer My Disbelief
8 They've Chosen
9 …
10 Pull The Plug (Bonus Track)

I have to admit I’m a little embarrassed by the fact that “Flesh_Power_Dominion” is my first encounter with this great band. You all know that saying “Don’t judge the book by its cover”? Well, me too, but somehow it wasn’t the case with Callenish Circle. A long time ago a friend mentioned them to me but I let it slip and finally, a year ago when I saw their last album “Graceful... Yet Forbidding” I simply didn’t buy it because of the cover! To justify my sins I can only say I didn’t know what style of metal they’ve been playing and thrash/death metal bands don’t put chicks with swords on their covers (or at least what I thought)! With so much power metal out there I simply didn’t have any intentions of buying another copy of Halloween or listen to yet another set of melodies that lack balls.

Expecting power metal and still having that warrior chick image in my head, I rolled “Flesh_Power_Dominion” and imagine my surprise when first notes from ‘Obey Me’ went through my head. I was shocked, and not only because it wasn’t the style I expected, but mostly because of the excellent version of melodic death/thrash that this Dutch outfit produces. Melodic, yet very aggressive and with edgy lyrics, the opener sets the tone for following tracks until ‘Bleeding’ where Callenish Circle steps back a little giving me some breathing room and time to put my stunned jaw back into place. With ‘Your Final Swansong’ they strike back brutalizing the listener with powerful guitars, varied tempos, breakdowns, well-thought arrangements and top class musicianship. If their own songs were not enough, they throw in a cover of Death’s ‘Pull the Plug’ that is so good it would make Chuck Schuldiner proud. Brilliant! It might be the best Death tribute I’ve heard!

One of the things that sets Callenish Circle apart from the rest of the crowd are the vocals of Patrick Savelkoul. Rather than only screaming like most of his peers do, he operates on the edge of death and black metal adding a very refreshing touch to the very overused and repetitive vocal style. While not being the most original band out there Callenish Circle manages to mix melodies with aggression remarkably well and many of today’s tops Gothenburg style playing bands would love to have this set of tracks under their own discography. If you enjoy melodic but technical brutal death metal you can’t miss “Flesh_Power_Dominion”.

Bottom Line: Don’t make this same mistake I did and don’t let this great band slip through unnoticed. Definitely a classic among the melodic death/thrash releases of 2002.