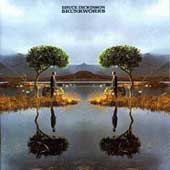 Ahh, what a pleasure it is to review an album I adore so immensely and on so many levels! "Tattooed Millionaire" and "Balls to Picasso" were so horrible and unoriginal that I had very early written off Bruce Dickinson as a gone-by metal legend who didn’t have what it takes to make it on his own. And then came this amazing album... this "Skunkworks" project... oh hell, what a difference and timely salvation! He not only turned in the right direction, he single-handedly forged a brand new “sound” which is completely unique to this album, the type of sound some bands would spend their career on perfecting. While the majority of his fans found the later works even more impressive, "Skunkworks" hit the right note with me and I see it as the ultimate and somewhat unexpected climax of his solo career!

Bruce finally seems to have taken his band seriously after the two whimsical previous albums. This time there’s energy, there’s atmosphere, there’s emotion, intensity... a completely thought out and perfected masterpiece! It’s amazing how catchy and full of hooks it is for a relatively slow paced and often mesmerizing album! It churns slowly but surely and pulses with a strange intensity that keeps the mysterious atmosphere in a constant state while the different songs experiment and move in all kinds of different musical directions and styles. Impossible to label, this is a strange type of mellowed out heavy metal that wouldn’t lose a speck of it’s brilliance 20 years in the future or 20 years in the past, it’s original, it’s timeless.

The songs are finely and carefully constructed and produced with the utmost perfection. Hooks and strong beats of speedy tracks like 'Solar Confinement' and 'Innerspace' get your head bobbing readily even though the drums and bass are not nearly as dominant as they could have been. 'Inertia' and 'Back From the Edge', even the strange, atmospheric 'Octavia' you’ll be singing to after hearing only once, they’re so potent and fun that you can’t help yourself! Bruce’s lyrics, which are intelligent and thought-provoking and often deal with strange occurrences probably from his early life, you’ll also be singing along to in a short while. He has perfected the concept of vocal and instrumental harmony, every sound fits seamlessly into his singing patterns and that’s what makes it so damn catchy! The closing track 'Strange Death in Paradise' is so mesmerizing and progressive it would make Dream Theater jealous!

"Skunkworks" (much like the actual secret government project) still remains a mystery to me after listening to it for some half decade, it’s fun and simply never gets boring! The formula is perfected, every song has something unique and different. Dickinson’s voice is even smoother and more likeable than I ever remember him from Iron Maiden. This album marked a significant turn in his career that, with the help of the two well-known follow-ups, made him one of the most important figures ever in the genre of heavy music. Do not pass this album by, it easily knocks out of the water both 1997’s famous "Accident of Birth" and ‘98‘s "Chemical Wedding", though I’m sure many will disagree. Get this album!

Bottom Line: A brief summary of the words I used to describe this godly album: mysterious, atmospheric; progressive; potent; fun; catchy; powerful; original; perfected; timeless, brilliant... so what are you waiting for??