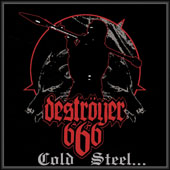 Australia - The land down under. There isn’t much that we know about it besides that there are kangaroos, is there? This huge untamed territory located at the other end of the world for us North American’s bears many secrets. Unless you're a specialist of the music scene in that area, most people don't really know of many bands that come from there, particularly anything relating to metal. Earlier this year, I discovered a fantastic band called Virgin Black who came out with an amazing album, “Sombre Romantic”. However, there is more in Australia than I was expecting, and that would be Destroyer 666.

With Destroyer 666, another Aussie representative is knocking at my door. Should I open it? This one is much more scary looking than its Avant-garde predecessor. Then again, if you're a hard-core fan, your door must be wide open and you'll surely welcome this brutal beast, because I'm sure that these guys will perfectly fill your savage needs.

This is Destroyer 666’s third full-length release, aside from the two EPs, one MCD, and a demo produced by them since their debut in 1994. Prolific destroyers, if I may say! The music can best be described as being fast and straightforward death metal. The vocals are of the scary type but remain understandable in most parts. There are many good guitar parts with great riffs and solos, ready to please many fans by their excellent execution and sound. The drum and bass sections are rolling like a bulldozer in hell. However, by some force of black magic, all this managed to remain melodic and even at some point, catchy. Even for a non-hardcore fan, such as myself, I could only appreciate the work involved in creating something that has been written with this level of complexity, thus requiring a high level of musicianship to translate it into sound. ‘Clenched Fist,’ ‘Raped,’ and ‘Witch Hunter’ are perfect examples of this. On these songs, I was able to find some thrilling atmosphere, calmer guitar notes, nice vocal effects, and as it is the case with most of the songs, very good guitar riffs.

Bottom Line: If this massacre of fast execution doesn't make your head spin, then I don't know what will!

Lately I’ve been having trouble finding some bands than can captivate me. It’s like I’ve drained the metal scene for everything it has, but obviously not. I guess I have to look harder. So, that’s why I was surprised when I was introduced to Destroyer 666 with their most recent album, “Cold Steel for an Iron Age”. Two CD’s and two EP’s later, Destroyer 666 is making new fans for obvious reasons.

I kind of expected possibly something typical from this band, for no reason really. I kind of figured they were some band with no innovation or idea of musicianship. Don’t ask me why, but that’s just what hit me before I listened to the music. Though, nowhere near my assumptions, I was pleasantly surprised by how tight this outfit turned out to be.

With nine tracks of Australian “War metal”, I was quickly consumed by the epic atmosphere of “Cold Steel...”. I’m sure many people are asking themselves what exactly is “War metal”. Well, I’d say it has a lot to do with the atmosphere. Ever listen to “Hammerheart”-era Bathory? This album definitely has that type of atmosphere, and that’s partly where term comes from. Don’t get the idea that Destroyer 666 is like a Bathory clone though. They play their own style of epic death and thrash metal. Every song draws very much upon itself to support its ideas, instead of another song. This means that the songs are all unique in there on way while still retaining enough in common that the album is consistent.

The band touches many different aspects. You’ve got tracks that have a lot of groove throughout. This is evident on tracks such as ‘Raped’ and ‘Sons of Perdition’. It’s just got the ability to really get you banging your head. Or you’ve got tracks that are just all out aggressive metal, such as on ‘Savage Pitch’. Then there are those tracks that really incorporate the atmosphere to its full effect, such as ‘Witch Hunter’ and ‘Raped’. It’s also nice to hear a few different vocal approaches. You’ve got black vocals on ‘Shadow’, and then death vocals on 'Black City', or maybe a combination of both on a song like ‘Sons of Perdition’. Also, it’s great to have war-like chants throughout the album acting as a backdrop for the songs. While taking only enough tips from their inspirations and still applying themselves to their music, the band has come up with an excellent piece of work.

Bottom Line: Destroyer 666 is a strong act. Not only are they making great music, but are somewhat unique. I can’t tell you what this is like compared to previous efforts, but if it’s anything like their back catalogue, I’m in for a few more albums of excellent music.