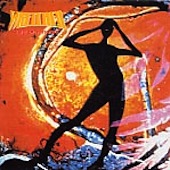 Maryland is quite literally the traditional doom metal capital of the world - it has to be with so many gems to unearth, mostly signed to Hellhound Records in the 1990's. Unfortunately, many of these very inspired and musically talented bands faded into obscurity after the label went bankrupt and closed by the end of the decade, screwing over many of their bands in the process. Wretched is a way lesser known outfit than The Obsessed, Iron Man, Count Raven, or Saint Vitus, all of whom made up the Sabbath-loving Hellhound roster back then, but their main claim to fame might be the vocalist Dave Sherman who formed the better known (but still largely overlooked) Maryland doom band Earthride. At any rate, Wretched (though their name isn't unique from numerous other bands) deliver hook-based, grooving, and somewhat eclectic classic doom metal on their debut.

This is The Obsessed-circa "Lunar Womb/Church Within" style doom, so don't expect anything too slow, but do expect there to be a curiously jammed-out feel to the music. This is a tendency that actually makes this album feel approachable to many kinds of heavy rock fans other than true doom metalllers. Anyone into Alice in Chains (who, fight me, have a lot of doom metal in their sound) could easily appreciate this stuff, especially the stoner-rockish guitar melodies accenting the Sabbathy metal riffs. In fact, the riffing in songs like 'Verbal Suicide' and 'The One I Seek' make me feel a lot less blue about The Obsessed only having a few albums in the 90's. No doubt Wino himself is in good standing with the surviving members of Wretched.

Albums like Life Out There really highlight the variety offered in a style like traditional doom. Many people wouldn't necessarily realize this is true doom music, in fact they might think it's grunge or stoner rock, but as it turns out, the Sabbath influence of traditional doom metal is so far-reaching that it unifies many of the bands playing these respective styles. The result is that Wretched feels like an excellent gateway into classic doom from better known kinds of rock and metal, despite this album being entirely overlooked. All the right elements are here, ultimately. A warm guitar tone that blends cozily with the just-overdriven-enough bass (see the opening bassline in the title track) makes for the right amount of heaviness to suit both the wistful lead melodies and the chunky rhythm guitar progressions. One need look no further than the bridge of 'Standing Down' or the unexpectedly foreboding hooks of 'Unknown Soul' and 'The Fight' for a sense of doom metal melodicism coupled with beefy riffs that doesn't sound like a basic Trouble clone.

This is definitely one of those 90's "CD" albums, too - the time when albums started getting longer because they could fit more stuff on the media format. Sure, it's under 45 minutes while a lot of other albums in this league are well over an hour (see Count Raven's "High On Infinity"), but the way this album is structured, that is, 10 tracks with no interludes, it still lends the album the feel of being longer than it actually is. That's actually a good thing, though, because the music is damn good, so by time you finish the album, you feel like a satisfied doomaholic. Really, I could listen to the riffs on Life Out There all day, both the groovier ones and the more mysteriously doomy ones. This is the type of album that doesn't need any instrumental tracks, because riffing is already such a strong focus, which is one of the best things you can say about the Maryland doom scene. On top of that, the vocals feel gruff enough to grab your attention but not so much that they feel out of place with the chilled, grooving metal music on display, so it lets you focus on the instrumentation.

Lastly, the cover art for this album is so damn cool, I really like it! It's... wacky but it fits the music perfectly! Who is the figure we see a silhouette of juxtaposed against a colorful Dr. Seuss-esque background? Totally has a 90's stoner or grunge feel but it's just pure doom with loads of diverse influences! I'm not sure if that artwork is photography or a painting or a hybrid, but it is ART!

This is ultimately the type of album the average metal listener needs more of in their musical diet, even if it is by and large not something most people into heavy music would listen to that often unless their favorite bands are without doubt Black Sabbath, The Obsessed, and Alice in Chains. Then, this might be your favorite album ever.