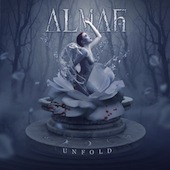 Type: Full-Length
Release Date: 2013
Label: Scarlet Records
Genre: Melodic, Power
1 In My Sleep
2 Beware The Stroke
3 The Hostage
4 Warm Wind
5 Raise The Sun
6 Cannibals In Suits
7 Wings Of Revolution
8 Believer
9 I Do
10 You Gotta Stand
11 Treasure Of The Gods
12 Farewell
MetalBite on YouTube

A nice progressive metal album that is uplifted by some slight power metal influences is created by Almah. The songs have a sense of being epic and melodic simultaneously to craft a very interesting variety of music styles. The ability to be catchy and complex in unison is one of the advantages that this outfit has throughout. All songs have both an ability to stick in your head, but also to push towards progressive leanings at the appropriate moments.

Musically, though the band sounds influenced by the likes of Dream Theater, there are also leanings towards Helloween, Judas Priest and others in an interesting combination. Thankfully an ability to craft songs likens them more to Priest in the long run than the sometimes over-indulgent aspects of the progressive metal genre. In terms of highlights, “Wings of Revolution” shines through as a strong and memorable moment on the disc, but other songs have an almost equally large impact. The vocalist has a nice range, but has a slightly too European flavor for my tastes. Instrumentally, the solid backdrop overtakes the vocals anyways and makes each riff stand out. Having only been exposed to the other album in their discography Motion, Unfold is nonetheless a nice improvement over that disc.

The variety of influences and styles really makes for a memorable disc that could be improved by slightly more experimentation. Hopefully, the band’s next album impresses me as least as much as this one does. From traditional to progressive to power metal influences, there is a lot to like with Unfold.