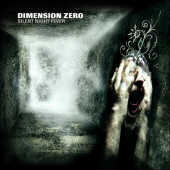 ::   ::
Type: Full-Length
Release Date: March 14th, 2002
Label: Century Media Records
Genre: Death, Melodic, Thrash
1 Silent Night Fever
2 The Murder-Inn
3 Through The Virgin Sky
4 Your Darkest Hour
5 Not Even Dead Yet
6 They Are Waiting To Take Us
7 Until You Die
8 End
9 Slow Silence
MetalBite on YouTube

What the hell happened to Dimension Zero? Their last album came in 2007. Okay, since the pretty ambivalent comeback work of Iron Angel, it is anything but unique to have a period of more than even 30 years between two long players. Nevertheless, I fear that the band from Sweden has died a silent death. Speaking of silence, Silent Night Fever is definitely more feverish than silent. More precise: silence is conspicuous by its absence. Delirious, hot tempered thrash awaits the listener, executed in a fervent manner. The members of the line-up were involved in roughly 20 further bands. They cover the whole range from gold to shit, sorry, from Marduk to In Flames, and their professional approach shimmers through every tone of this compact debut.

The production is the first indicator of the experience of the dudes. The album boasts with a clear, powerful, sharp and aggressive sound which does not lack pressure. Well-dosed brutality coalesces with technical skills and this liaison brings a stormy and pinpoint package of thrash metal to light. The first eight tracks are carved from a single piece of wood. Do not expect too much variation but a feast of double-bass driven, very fast thrash that releases a massive portion of energy. Melodies are identifiable from time to time, but they do not play an extremely prominent role. For example, the chorus of "They Are Waiting to Take Us" reveals a short melodic harmony, but it is accompanied by furious vocals and merciless drums. I am sure, my Grandma (R.I.P.) would not have called this sequence "melodic". Anyway, razor-sharp riffs cut the listeners into pieces. I am becoming a witness of a kind of amok run of thrash guitarists - and it feels good.

By the way, a lot of epic, melancholic or even gentle parts show up - in the history of metallic music, but not on the here reviewed album. Dimension Zero, lame pun, are a little bit one-dimensional and the fact that they do not really vary the velocity leads to the dubious result that I begin to take the vehemence of their compositions for granted. Only the closer breaks out of the compositional formula of the band, but this piece with a length of two minutes rather appears as an outro than a regular number. In general, Dimension Zero rush through their material as if they fear to come too late to the traditional Midsummer celebration. This way of proceeding is at the expense of a healthy quantum of catchiness and this circumstance slightly reduces the enjoyment of the album. On the other hand, the formation avoids inappropriate breaks. All different sequences merge seamlessly into each other.

Finally, Silent Night Fever does not necessarily satisfy the needs of old school thrashers. Despite the absence of groovy or experimental elements, the album spreads modern vibes, not only due to the up-to-date production and the almost robotic precision of the quartet. Nonetheless, I do not see any type of showstopper for the supporters of the sub-genre. As long as their affinity for musical vehemence does not end at "Souls of Black" or "...and Justice for All", each and every thrash lunatic can check this work with a clear conscience.

Started way back in 1996 by ex-In Flames members Jesper Strömblad and Glenn Ljungström, the original idea for Dimension Zero (then called Agent Orange) was to create something with the (then) intensity of In Flames, but to take it a step further creating a faster and more brutal approach. The In Flames influences are definitely still present; smooth melodic guitar lines and classic choruses, but thrown in are some seriously fast and thrashy guitar lines, almost black metal like at times, which give the music an edge over the beginnings of the band...

This is a good melodic death/thrash record, don't get me wrong there. But like many others, it has been done and done and done already. The overall result I hear in "Silent Night Fever" is that of In Flames’ melody mixed with the grind of At The Gates meets the straight out thrash speed of Children of Bodom. Now obviously this is a great combination, but I am a big fan of originality and this CD contains next to no original ideas...which is unfortunate, because these guys can really play.

However, the production on this album is above average for a medium to small band. There are some small but very effective vocal effects strewn throughout the record that add an interesting touch. Both the guitars and drums are mixed well with the vocals, the mix is big on bottom end but has been compressed enough to sit flat and not move anywhere. Dynamically this CD is very flat; there is not a lot of shift once each song starts. You are hit with the traditional wall of sound and it doesn’t relent until the song is over.

The songs themselves are well constructed and well written, but basically all fit into one of two distinct categories. The first category is the more melodic In Flames style songs; although they sound very similar it can be excused for obvious reasons. Then comes style two, which is the more speed-thrashy type. It is this second type which makes up the majority of the songs that unfortunately makes the album a little repetitive, but to the metalheads out there who just want to jump up and down, punch the air and swish their hair around this album is a godsend.

Bottom Line: All in all, this is a good thrasy melodic-death album. The songs are hard hitting, the production is good and the vocals will tear your head off. I'm just looking for more variation somewhere around here.....