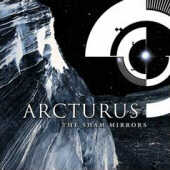 Five years ago Arcturus released an album that nobody really saw coming. It was when they first appeared in 1995 that they released a symphonic black metal release, which made somewhat a name for them but really didn’t showcase the bands amazing talent. Then, two years later, the band threw one of the biggest curves at their fans that a band could do. With the release of “La Masquerade Infernale”, critics were puzzled and amazed by the uniqueness and ideas that it contained. Now, in 2002, the band follows up to the high standards that have been set for them, and has released “The Sham Mirrors”.

While the change from “Aspera Hiems Symfonia” to “La Masquerade Infernale” was drastic and immeasurable, the change from “La Masquerade Infernale” to “The Sham Mirrors” isn’t as far stretched. The band didn’t completely defy their history, but they did in fact make changes. “The Sham Mirrors” is a more conservative record, and doesn’t show as much wavering in the songs. That’s not to say that it’s more listener-friendly though. It takes multiple listens for one to dissect the layers of music and the detail of the songs, which ultimately makes for a more intense record that will last a long time.

There are indeed many similarities within the band, as well as differences. The songs are composed in a very orchestral way, like previously. The atmosphere is a bit different, though. While on “La Masquerade Infernale” you may have found the songs to each hold a different atmosphere, “The Sham Mirrors” has a very dark feel to it the entire way through. The carnival-like atmosphere is gone. Overall, the album is a bit conservative compared to previous Arcturus, but the music is excellent and the band didn’t create the same thing twice.

The performances of the musicians are great. Since their formation, Arcturus have been considered by some people as a “supergroup”. I can’t say I disagree. While vocalist Garm, or Trickster G. Rex as he is referred to here, was great in the past, he shows his best performance to date here. He has found an excellent range for himself, and the emotions he conveys come off as passionate and not simply a humorous attempt. Steinard Sverd Johnsen has shown us the best of his capabilities here. The keyboards/piano is one of the very strongest aspects of the album. They add a new dimension to the music, as always. I must say, Jan Axel Von Blomberg (Hellhammer) continues to show his increasing ability with every record. His performance on “The Sham Mirrors” is fantastic. Guitarist Carl August Tidemann has always been an underrated guitarist, and will probably continue to be, but I can say that he has done just as great a job as he has ever done. As a band, they have surpassed their history and have done a great job.

Bottom Line: It’s hard to explain to you what Arcturus’ music is like. It’s more of something to be heard and experienced, than something described with words. But, I can assure you that “The Sham Mirrors” is a great piece of work, and should put any doubts about the band to rest.

It seems like I’ve been complaining about Power-Metal vocals for years. I’ve always said that many power bands have great music and only need to replace the vocalist to make something excellent. Well the time has come for almost that; Arcturus has rendered an album that is power metal through and through but doesn’t sport the high-pitched wussed-out wails normally associated with the genre.

So, why am I still not too excited?

The elements are all there; the songwriting, the arrangements, the artistry, the technical expertise, and a damn good deal of intensity. But blink your eyes twice and you come to realize that, in fact, some of the elements are just overdone.

The keyboards on this album make you feel like you’re living in an infinite bounce on jelly-belly planet, dodging flying gumdrops. If half the keyboard parts were done by the guitar instead, the music of ‘The Sham Mirrors’ would lay waste to anything in its path. The melodies are intense and expansive and could’ve come out with dominating force and genius. But the complex melodies become candied by the synthesized sounds.

Without a doubt, there certainly is a great amount of talent at work here. It’s a talent that will coruscate across the plastic of any disc. The blazing complexity of each song is evidence enough of that, and it’s probably enough to get this album into the collection of most music lovers’ collections.

But again, that talent is held back by some choices that don’t compliment the band. Hyper-extended keyboards aside, Garm’s vocals come across as invariably mediocre the majority of the time only to shock you with dynamic intensity delivered on the track ‘Radical Cut’. Fans of Katatonia or the mellow Anathema may find great entertainment value in his performance, but I prefer the blackened style that he excels at.

Despite what the title of the album might suggest, this is not just an illusion of good music. There’s so much to explore on this album that it allows for more attentive listens. Bands that can achieve that are in their own arena with critical acts such as Tool or Opeth, and they are well on their way to becoming classic and essential collection items.

Bottom Line: If you’re a fan of metal and talent, do yourself a favor and at least check it out even if over-blown keyboards turn you off.

“...“The Sham Mirrors” arrives at a time when metal needs it most” (The End Records. 2002). How apt a statement, metal may truly be in a state of temporary flux after the constant breaking and making of groups and the consistencies of albums from metal bands are certainly wavering. “The Sham Mirrors” has certainly come at a good time.

Arcturus’ beauty is so unique it cannot be termed, and phrases of genre cannot be coined to the band’s name. I tried (rather unsuccessfully) to naively define Arcturus’ second album “La Masquerade Infernale” as ”phantom of the opera metal” but it is one task that cannot be done. Arcturus is an entity that cannot be defined, they defy metal tags and classifications that we try to shackle upon them. “The Sham Mirrors” is no exception to this.

One could argue that Arcturus did take a step back into the more conventional side of things after “La Masquerade Infernale” and “Disguised Masters”. “The Sham Mirrors” is certainly more ‘metal’ than the two aforementioned releases by these cult metalists. However stripped to the bone, “The Sham Mirrors” is far from simple and pedestrian. Complex keyboard and guitar patterns are still be discovered by me on every new listen and my appreciation for “The Sham Mirrors” continues to climb at an astonishing rate.

Of special mention is the song ‘Radical Cut’. The build-up and climax to this song is totally brilliant and uses every bit of tension and extreme dramatics a metal band could possibly have at their disposal. Step-by-step and piece-by-piece, Ihsahn’s voice and the keyboard mastery of Steinar Sverd Johnsen are traded blow to blow for 4 minutes until the culminating minute and half when both musical assets are warped together to fuse a perfect combination. Utterly mind-blowing. Ihsahn has never sounded this good before.

Vocally, is the department where Arcturus is really able to accelerate away from the rest of the competition, arguably one of Norway’s favourite sons; Garm completely devastates on each and every song (Ihsahn being used on ‘Radical Cut’). Garm’s vocals are madcap and carnival in their theatrics one moment and then suddenly shift to a more calmed and controlled output. Instrumentally “The Sham Mirrors” is easily able to stand on its own two feet, however, it is with a vocalist like Garm that Arcturus is able to tell everyone to pack their bags and go home. There is no competition here. Arcturus is the beautiful swan in a pond full of dull, drab, boring and bland ducklings.

Bottom Line: A truly fantastic record, Arcturus has surpassed my extreme expectations and climbed to a new pedestal that I had waiting for them before I heard “The Sham Mirrors”.