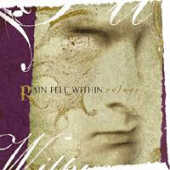 Buy on: Bandcamp
Type: Full-Length
Release Date: 2002
Label: Dark Symphonies
Genre: Atmospheric, Symphonic
1 Torn Apart
2 In The Knowing Of You
3 The Child Beneath
4 In My Dreams
5 Save Your Soul
6 Winter's Embrace
7 Into The Tower
8 Sirens
9 Burned Away
10 Passing Time

Rain Fell Within has come out with a second CD. “Refuge”, the dictionary defines it as, a place where one can find shelter or protection from danger or distress. In all honesty I need a refuge from this CD. Although I am not familiar with Rain Fell Within’s previous work, I do have to say that “Refuge” is a horrible, horrible music disk. All music must have a balance, and that balance is placed in the vocals and music. “Refuge” sounds like two different CD’s when it is played, one focusing on the music, two focusing on the vocals. They do not compliment each other at all.

The musicians in Rain Fell Within know half their job; playing good music. The music does a good job of playing on the listeners emotions. The band also does an amazing job of brining in outside sounds and instruments, like in the song ‘In My Dreams’ when the band brings in what sounds like native drums for the intro. My only problem seems to be that these outside influences are only brought in for the introductions to the songs; I think it would be more benificial if they continued these influences throughout the songs. “Refuge” has many quality music tracks, but there is of course the odd one out. In this case ‘Save Your Soul’ has to have the most horrible introduction I’ve ever heard. The way they have used the drums sounds like they want to break out in Polka. The musicians on Rain Fell Within’s “Refuge” have made one drastic mistake. To be considered an excellent musician one must be able to shape their playing around the voice of the singers. A band is only as good as its weakest member, in this case both vocalists.

Both the lead singer Dawn, and the backup vocalist Laurie just don’t strike me as good vocalists at all. Their voices are so completely different that when they sing together it sounds garbled and out of tune. Laurie has a very high soprano voice, her high notes sometimes sound nothing more then screeches, and it sounds like she struggles with some of her notes. The lead vocalist Dawn, has some “odd” tendencies to her voice. As she rises from a simple note to a high note there is no variance in tone, leading the voice to sound flat and out of place with the music behind it. Because both singers sing in an almost “opera” style, they do not suit the rock/melodramatic music at all, and it leads me to think they did not hear the music while recording the song.

In conclusion Rain Fell Within has shown me nothing noteworthy. This band needs to re-think their vocal and musical strategy before recording their next CD. “Refuge” has left a bitter sting on my tongue, and has turned me off from ever listening to this band again. This band needs to take a good listen to the kind of CD’s they are producing.

Bottom Line: “Refuge” has to be the most horrible attempt at an opera/metal CD that I have ever heard. My advice is to burn down any music store that carries it, because they have tainted gothic metal forever.