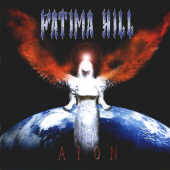 Japanese music, like the majority of the country’s exports, always seems so bizarre and infinitely complex to westerners. And while even the most obscure metal bands from all corners of the world thrive in the country’s scene, the lack of Japanese bands (or lack of their exposure to us) is very surprising! With more than 10 times the population of Sweden and an even higher percentage of metal fans, shouldn’t we all be hailing boundless numbers renowned metal gods from Japan instead by now? With statistics like these I’ve come to adopt high expectations from Japanese bands, Sigh’s latest work was genius, are their cohorts from Fatima Hill on the same train? No! They’re driving the damn thing!

Now let me first detail the good stuff, because this little bit I absolutely cannot hold in... the lead guitarist in this band is fucking amazing!! The man who calls himself simply “Anjue” plays with such feeling and such a wondrously exotic and strange style that the majority of players in the biz would quickly be devoured by jealousy. He’s got a mature, totally developed style with an immediately recognizable sound that is absolutely unique. I have to rewind to hear his solos at least three times before I let the rest of the song run. Absolutely brilliant and very inspirational!

O.K, that felt good. As for the music, the fundamental promise by Fatima Hill is “different”, and it’s a good kind of different. The opening track didn’t bode well, but as the album progressed the songs became more and more fun to listen to: strong grooves came in and the riffs picked up speed. All kinds of studio and synth effects awoke, backed by diverse and unusual rhythm patterns. Songwriting shows genuine talent and skill: far from ever being bored, they are always taking you different places with the strange euphony. From traditional instrumental ballads aimed at the soft spot in your heart to festive and impressive yet hard-hitting metal numbers, Fatima Hill have all their bases covered. I swear I hear influences from bands as diverse as Dream Theater and Death all folding and blending within. They have all the traits of true prodigies and progressive solos will often freely go for minutes unstopped. ‘Ultimata’ is a great example.

And now I have to plunge them into the muck for a bit and explore into the not-so-nice chapter of my thesaurus. To put it simply: the singer brings down the whole band. That’s the hard truth, the female vocalist sounds like someone giving birth and trying to sing operatic at the same time. I cringe when I hear her voice, and dammit, I cringe when I think of how such great and talented band suffers from this incompetence! Fortunately, the aptitude and potential of the other members overcomes this weakness and we’re left with a wounded but extremely strong band. Very interesting, very different, Japan is a metal goldmine and it’s high time fans grabbed their picks ‘n shovels and dug in!

Bottom Line: They would get a much higher rating if it wasn’t for the atrocious vocals. Otherwise flawless, a top-notch album!