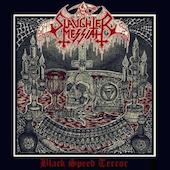 The first EP of Slaughter Messiah holds three tracks and they show that Belgium's underground is still a force to be reckoned with. The relatively small country played a pretty important role in continental Europe during the early eighties with bands such as Killer, Cyclone or Acid. All these pioneers stayed in the underground and Slaughter Messiah's sound will also not fill the arenas. That's great, because the band celebrates a bloody orgy of black thrash metal. Its very malignant atmosphere is, among other things, based on the nasty nagging and screaming of lead vocalist Lord Sabathan. Friends of Enthroned know this dude very well and they will quickly realize that he fights under a new banner, but his musical ideals have not changed.

Given this situation, Slaughter Messiah and Enthroned stand together against the plastic sounds that try to infiltrate the metal scene. A black stream of morbid or devastating guitar lines and hammering drums with strong double bass parts characterizes the songs. The programmatically titled "Black Speed Terror" is the fist in the face of those clowns who think that metal has to have decent choruses, smooth lines and acoustic breaks. This does not mean that Slaughter Messiah fail to create the necessary degree of diversity. They have designed interesting song patterns that ensure the attention of the listener. It is almost paradox that their unexceptionally steely riffs result in flexible structures. But both the title track and "Cosmic Funeral (The Great Old Ones)" demonstrate that even extreme metal leaves enough room for variation. The pretty short "Demon" takes a rather straight and narrow-minded route, but this is also a more than solid number.

The sound is less powerful than on their later EPs, however, the Belgian horde blows away all elements of beauty. The guitars convey dark vibes and define the appearance of the band, albeit the hostile voice of Lord Sabathan plays its part as well. It is doubtlessly a pity that the production cannot compete with the heavyweight mix of Morbid Re-Incantations, yet I am speaking of a debut and therefore the sound is totally acceptable. I hope that the band (or whosoever) decides to press a second edition of this vinyl, because old men like me always need a physical copy in order to enjoy music in general and in particular this output (especially Black Speed Terror) whole-heartedly.