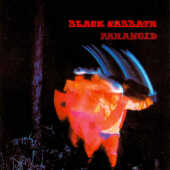 Released the same year as their self-titled debut album in 1970 after seven months of writing and tours, Black Sabbath's Paranoid would instantly become the irrefutable icon of their entire discography, and one of the most important albums for the early foundations of heavy metal in general. Virtually every classic rock radio hit from Ozzy Osbourne era Sabbath is here including 'Iron Man', 'War Pigs', and 'Paranoid'. All of which have been overplayed to the point of actually depreciating their worth. Even still I can acknowledge that Paranoid is a strong collection of material which has spawned many imitators to this day, but no one has ever managed to replicate this raw unbridled stoner rock doom and gloom.

The three aforementioned radio hits need no introduction, but they are a good indication of what you can expect on the album. Paranoid rids Sabbath of their blues rock sound predominantly heard from their debut album in favor of crafting every song around the slow, atmospheric and theatrical hit song 'Black Sabbath' from the same album. There's plenty of variety here too though, still obviously taking inspiration from their blues rock foundations as musicians, but song like 'Fairies Wear Boots', 'Planet Caravan', and the instrumental 'Rat Salad' incorporate elements of jazz while 'Planet Caravan' dials down the punk rock aggression of 'War Pigs' and 'Paranoid', going for a Pink Floyd style space rock tune, practically absent of Tony Iommi's raw electric guitar with exception to the laid back muzak guitar solo.

Geezer Butler comprised most of the lyrics for the album and much of the tension and atmosphere also come from the lyrics themselves. It's worth stating again that this album was recorded in 1970, there were plenty of acts out there that sounded just as heavy as Black Sabbath including bands like Blue Cheer, Iron Claw, and Gun but none of them could match Sabbath's haunting atmospherics as heard on tracks like 'Electric Funeral' and 'Hand of Doom'. It's like comparing Street Fighter with Mortal Kombat; sure, there are plenty of similarities between the two, but one is going to immediately jump out and grab everyone's attention when Sub-Zero freezes a guy in a sheet of ice and rips his head off with his spinal cord still attached. Black Sabbath had that same kind of appeal in a sonic sense. For me personally, it was the first heavy metal album I'd ever listened and it almost sounded like something that was forbidden to be listened to, and as one might imagine, Black Sabbath have become one of the most reviled heavy metal bands by churches and religious officials mostly due to the very material heard from this album.

The band took this satanic and grim imagery and really ran with it all the while sounding every bit as inspired as they did on many of their early work from the 1970's. Ozzy Osbourne has an unmistakable nasally high pitched voice that helped to distinguish Black Sabbath from all the other bands of their time. While he'd much later be replaced with much more talented singers, he gives the listener perhaps his most varied vocal performance on this album than any other recording he's been on. 'Electric Funeral' finds him hitting some of the highest notes in his range towards the latter half of the song while 'Planet Caravan' utilizes a Leslie speaker that gives Ozzy's voice a very ghostly quality all the while displaying his lower register.

A lot of people like to say that Tony Iommi to be the end all be all of Black Sabbath's sound and while his performance is the very definition of heavy metal itself, the real star of the show on this album is Bill Ward. Delivering a spastic drum solo on 'Rat Salad', maintaining the driving force behind the jazz-laden jump blues of 'Fairies Wear Boots' and ever so famously introducing us to the opening of 'Iron Man'. Sure everyone remember Iommi hammering away at a bended guitar string behind the head stock of his guitar, but every time you hear that brief moment of silence on the radio followed by the unmistakable "thump, thump, thump, thump" instantly I know what song is player literally every single time.

Tony Iommi has also crafted some of his absolute best material here as well, anyone who's ever picked up a guitar and learned how to play it can jam out to 'Iron Man'. For me, 'Paranoid' was the first song I ever learned how to play on guitar. The band has remarked that the song took them 5 minutes to write as they needed one last song for the album. It's by no means filler though and is one of the most welcome additions to the album. Sure, it's repetitive but also showcases Black Sabbath doing a style of music they're not very well known for, punk rock. The riff to 'Paranoid' is so simplistic it sounds more like something that would've been crafted by Glenn Danzig era Misfits. The solos to 'Paranoid' and 'Iron Man' are some of Iommi's most concise shred fest guitar solos he's ever made, they actually sound very well thought out which is in contrast to a lot of his solos which often feel improvised and unrefined.

Geezer Butler really shines throughout the record, not only did his lyrics manage to turn quite a few heads, his bass playing is exceptional as well. There are plenty of moments where Geezer is allowed to carry the rhythm and pacing of the songs like 'Hand of Doom' but then you have tracks like 'War Pigs' where he plays his own bass solo in tandem with Iommi's guitar solo. 'Fairies Wear Boots' also have guitar and bass parts that diverge from one another as Geezer sets a blues groove under Iommi's jazz riffing throughout the verses.

Black Sabbath's sophomore release is one of those legendary moments in heavy metal history where each member is firing on all cylinders. There's more experimentation here than most other Black Sabbath albums, most songs have taken on progressive structures and there are so many musical ideas tossed around on Paranoid that it's actually surprising that the album comes to any kind of cohesive whole. Although some tracks have been overplayed on Classic Rock radios for decades now, upon listening to the album it's easy to see why. Because of this it hasn't aged as gracefully as it perhaps should have, but even taking my bias towards that into account, I find myself struggling to come up with much criticism towards Paranoid. By 1970's standards or rock n' roll music, this release was not only ahead of its time and evocative, but an absolute blast to listen to.

Superchard gets super hard for:
'Planet Caravan'
'The Hand of Doom'
'War Pigs'