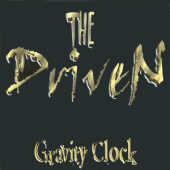 This power/progressive rock band was formed in late 2000 after two members of Inner Strength, Joe Marselle (guitar) and Scott Oliva (vocals) decided to unleash their musical vision under a new name, The Driven. Their vision is self-described as “raw, simple, straight and to the point”... I can agree with first 3 but to this day I’m not sure what point are they talking about because to tell you the truth, I don’t even see a point in releasing “Gravity Clock”.

So, let’s get their vision under a microscope. Raw - recorded with a low budget at mostly home studios, “Gravity Clock” sounds very raw but that’s not the problem here. The vocals are way up front, the guitars have too much distortion for a power/progressive style, dynamics don’t even exist and the stupid cover looks like someone did it 1 minute before it went to print.

Simple and straight - Oh in this department they achieved the ultimate highs... it so simple and straight that if you put me against a wall and stuck a gun to my head, I wouldn’t be able to recognize a single track by its title. The musicianship is actually quite promising and leaves some hope for the future, but if it doesn’t go together with a feel and touch for some good melodies The Driven faces a long road to the top.

To the point – I already said it; I have no clue what they’re talking about.

If this is “unrelenting power rock at it’s finest” as they claim, then power rock is dead for me because I don’t want to hear any mediocre bands after having had to endure the finest sons of the genre.

One thing I have to give to them is that for only $8 they delivered 18 tracks (68 min. of music). But on the other hand, I had to take a break after the first 9 just to make sure I could make it to the end. If they put all those ideas into 9-10 songs, gave them better arrangements and production maybe I’d appreciate this album a little more, but 18 tracks that basically sound the same without any atmosphere resulted in 3 finished cups of coffee and half pack of smoked cigarettes, just to get through.

Bottom Line: Boring. If a rock band can’t make their songs stand from one another then there must be something terribly wrong in The Driven camp.