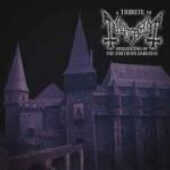 Ahhhh... Tribute albums. They are usually such a waste of time, and usually do damage to the band they are supposed to be honoring. I would much rather listen to the original band. Then every once and a while worthwhile tribute album comes along, which can breathe life into old songs and make them sound fresh. Moonfog record's "Darkthrone Holy Darkthrone" tribute a few years back was one such tribute. "A Tribute to Mayhem:Originators of the Northern Darkness" is another. This album is filled with some of the best bands in the metal scene. This, combined with my love of (pre "Grand Declaration of War") Mayhem interested me enough to pick this one up. Man, was I in for a pleasantly evil surprise! Since all the tracks on the album are at the very least decent (Seth), and some are amazing (Emperor), I will spare the boring track-by-track commentary. After all, if your reading this, you probably know what original songs sound like, so I will try to focus on the outstanding tracks.

The albums opens on a ferocious not with Immortal trying their frosty hands on 'From the Dark Past'. They pull it off flawlessly, and manage to make it their own, while still keeping the cold, creepy atmosphere of the original. The first really great interpretation comes courtesy of Poland's Vader with their version of 'Freezing Moon'. I know what you’re thinking... a brutal as fuck death metal band covering one of Mayhem's most atmospheric and cult songs? It seems unlikely, but they do it well. Peter's spoken voice echoes over the dark and foreboding music. Doc really keeps the backbone of the song strong with his powerful drum attack. This is definitely one of the albums highlights. After this, be prepared to be awestruck by Emperor's masterful cover of 'Funeral Fog'. The original was great, but Emperor has really kicked it up a notch and made it their own. Tryms drumming is nothing short of amazing, even better than Hellhammer's on the original. The production of this song really captures the atmosphere perfectly. Ihsahns voice sounds like a mix between his own and Attila's from the 'De Mysteriis Dom Sathana' album. Keyboards are added beneath the chorus riff, really giving the song depth. At the end they even throw in the intro riff from 'Freezing Moon' as the song fades out. This song alone is worth the price of admission.

Limbonic Art contribute 'De Mysteriis Dom Sathana' to the album. They dark, absorbing atmosphere put forth here is truly awesome. The drum machine doesn't sound out of place because the original drum track from Hellhammer sounds very cold and mechanical as well. Daemon and Morpheus even throw in a dance beat layered with hypnotizing guitars and magnificently menacing keyboards. Gorgoroth's take on 'Life Eternal' is very brutal. What they have done is taking a song, which originally was more of a creepy, atmospheric piece and turned it into a dirty, raw and brutal piece of pure aggression.

Like I stated above, all the songs on this album are good, but those are the ones that stand out the most to me. While most bands that have tribute albums don't deserve it, Mayhem truly does, and thankfully it was done well. Most of the tracks on here are from the classic "De Mysteriis Dom Sathanas" album, with a few classics form "Deathcrush" and one song of the "Wolfs Lair Abyss" MCD, misprinted as 'Into Thy Labyrinth' instead of 'I Am Thy Labyrinth'. About the only thing that could make this a better tribute would be Darkthrone covering 'Chainsaw Gutsfuck'. With a booklet that gives a nice overview of Mayhems early career, without dwelling on the infamous murders and suicide which we all have heard about a thousand times already, this is certainly the best tribute album out there.

Bottom Line: If you are a fan of Mayhem or the excellent bands presented here, you won't be disappointed. This album would also serve as a good introduction to any unfortunate souls unfamiliar with this legendary band.