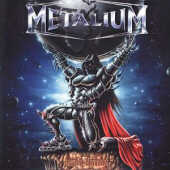 A very, very promising third chapter from Metalium. The outstanding take on lyrics that these guys have put together is quite impressive. According to the flyer that came with this promo record; the concept story behind all three Metalium records (including this one; “Hero Nation”) is about the Metalian who travels to all these different locations in the world “experiencing adventures, tortures or successes”. Metalian is a hero whose experiences are reincarnated through historical/mythical figures from around the globe, some examples of this include: Nero, El Cid, Rasputin, Odin, Joan of Arc and Romeo and Juliet. What this means for us is a highly interesting, yet overblown take on a lot of moments of crucial world history. Ambitious, but the lyrical concept ultimately pays off for Metalium as they can draw upon such solid facts and warp them into an interesting historical interpretation/story.

Musically, Metalium does not deviate to far from the norm in fantasy power metal. What one can come to expect from acts like Rhapsody and Metalium is little variation in a very tried but very proven formula, and ultimately this will never change between records, so one must give up hope of a resurrection and/or new perspective in fantasy power metal. “Hero Nation” is a good album though, and moaning about trends and styles in power metal is not going to do this record any justice.

Technically there is no possible reason to fault Metalium, they are all extremely accomplished musicians. But with the amount of bands looking to grab on the coattails of acts like the aforementioned Rhapsody and Metalium I would like to see Metalium try and make a sudden left turn at the fantasy power metal crossroads and see where they might end up.

One other interesting note is that the last track on “Hero Nation” (imaginatively titled ‘Hero Nation’ too) contains a secret track towards the end (at 7:00 minutes). The secret track is a cover of the boxing hymn for the most successful boxing champion in Germany, who has been undefeated since 1978 called ‘Heart of the Tiger’. Metalium were asked to give it the ‘rock touch’. If you remember movies like ‘Kickboxer’ and ‘Bloodsport’ and the silly piano songs on the beginning of the title lead ups, ‘Heart of the Tiger’ is one of those pretty much. I love ‘Kickboxer’ and ‘Bloodsport’ so for it me it makes a nostalgic, fun listen.

Bottom Line: Interesting lyrics and faultless technical skills displayed by Metalium make this record great, but a lack of originality and adhering to safe formulas cut these All-stars down to size somewhat.