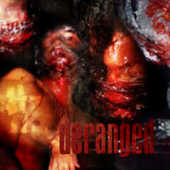 Sweden's Deranged are an unstoppable killing machine. Throughout their 11 track self titled release, these guys bludgeon the listener into submission with an unrelenting death/gore attack. Only the comical sample festering in track 6, 'La Orgia De Los Muertos', gave me a moment to scoop my entrails up off my bedroom floor.

While most bands out of Sweden are known for integrating Maiden-esque melody over a classic deathmetal foundation, Deranged is the most brutal thing I’ve heard out of Sweden. They drop the melody in favor of abrasive, dirty guitars, guteral vocals and a nuclear onslaught of a rhythm section. Their approach is one which has the old school death metal vibe mixed with the more punishing characteristics of today’s most brutal bands. The result is a noxious 35 minutes of gore drenched death metal. Numerous times during the album I was reminded of labelmates Aborted, but a more off the wall and less variation in the vocals than the aforementioned band.

Each track on here has a life of it's own. They throw in enough surprises to keep the brutal music from having a mindnumbing effect. Stand out tracks for me would have to be the violent and sick as fuck opener 'Flesh Rebel', and the more methodical 'Impulse, Prey, Pleasure'. The guitars are competently molested by Johan Axelsson, and the rhythm section of Johan Anderberg (Bass and Vocals) and Rikard Wermen (Drums) is tight and unforgiving in its onslaught. I really like the drums on this album, as they are pretty much fast all the way through, but not blasting the whole time. Also, the drum production on this album is amazing and it gives blasts whole lot of power and a unique sound. There really are no bad tracks on this album, each one is a sick and twisted journey of sick and twisted brutality.

Bottom Line: This is definitely a worthy purchase if your a fan of brutal death metal with a little gore grind influence on it. If you like Aborted and Severe Torture and other brutal bands you will certainly be pleased to sink your sick little teeth into this splatter-fest.