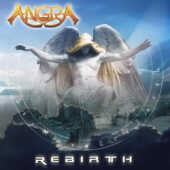 Few bands could have endured the kind of history Angra has experienced. After loosing three of its members, the remaining ones faced a difficult decision and it looked as though the band would not survive. However, endless fan support helped Angra to regroup and craft their strongest effort to date. Now with Rebirth, the band are on a new path to continue delivering some of the best heavy metal around.

Lending more influence to power metal, the music on this disc is even more towards an epic sound than past efforts. The title of the record was an indication that a change had taken place musically as well, and this was definitely a change for the better. Angra is now a greater threat than they ever were before. The vocals are much stronger than those delivered by their past vocalist in my opinion. The drum sound is massive, but coming from Brazilians, this was almost a sure bet. This guy has incredible rhythm just as the band, as a whole, has an amazing sense in dynamics. The talent of the musicians radiates through every note. The keyboards are a very nice touch as are the percussive sections and Brazilian singers.

As you would expect, the production is grand. Power metal usually demands the highest quality in production and this disc surely delivers. From the luring keyboard intro to the gliding melody closing this disc, the sound oozes perfection. There is still a muscle behind the music, so for those fearing Angra have gone totally happy metal, they can put those fears to rest. The sound has more punch than ever amidst the power metal atmosphere.

This cd took a while for me to get into personally. When I finally gave it a chance to sink in, I discovered how amazingly brilliant this cd is. It demands your full attention and then proceeds to rip you a new one. From the up-tempo to the slow and melodic, this cd has it all without becoming cheese. Angra fans are not to be without this glorious return! Power metal fans and fans of melodic heavy metal in general should get this cd as soon as possible!

Bottom Line: If you are a fan of the band or the power metal genre, then you simply must own this!