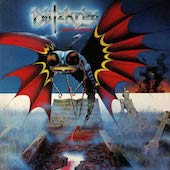 Some of us certainly have a very demanding, intense and time-consuming job. The telephone is always ringing, e-mails are constantly coming in, appointments are always pending and need to be prepared and followed up. So it's good to be able to relax in a state of boring equilibrium at the end of the working day, which is already too short. That may sound easier said than done. But fortunately there is A Time of Changes, a remedy recommended by leading doctors. Side effects are a little earwax and the urgent desire to listen to "At War with Satan" or "Hell Awaits" again. So nothing bad.

Blitzkrieg washed up in the NWOBHM and certainly didn't have the luck of the fittest. There are four years of absolute silence between their first single and A Time of Changes. No wonder that the train had left the station a long time ago. But would it have been otherwise with different timing? Probably, because some people seem to like this debut. I, on the other hand, can't find anything exciting here. The dudes of Blitzkrieg play - even by 1985 standards - rather simple, at best medium-hard, traditional metal. The songs are conventionally structured, the singer mostly remains in a relaxed chatty tone and even the rare use of the double bass gives the material only little steam. The choruses, which should normally crown a conservatively conceived song, also lack expressiveness. They are recognisable as such thanks to a minimum of catchiness, but apart from the somewhat drawn-out "Infernoo, Infernooo" there is little to hold the listener's attention.

Maybe I don't like the record because the band name or titles like 'Armageddon' create a false expectation in me. It's not fast and fiery here and the group is far away from any apocalypse. Even the solos add no touch of aggression. Sporadically, the marching tempo is increased, e.g. during 'Hell to Pay'. But Blitzkrieg have a penchant for integrating quite melodic tones in every song, so that even 'Hell to Pay' changes little in the basic mood of A Time of Changes. It is and remains in large parts the favourite record of Prince Valium and Baron Valerian. The two should be particularly at peace with 'Vikings', one of the more or less obligatory ballads of the time, even if this one predictably allows for a little more than anaemic mumbling after two minutes.

Whether by accident or not, every now and then Blitzkrieg manage to create a good piece of music. 'Inferno' has some fairly distinctive riffs and especially the relatively opulent title track with its catchy melody in the verses and the Dan Beehler memorial scream at the end collects plus points. Also positive is the down-to-earth attitude of the music and the renunciation of technical gimmicks to the detriment of the songs. Apart from these things, I can't identify many more pleasing elements. The album's own averageness oozes out of every pore. In any case, I was glad when the supposedly light-footed, actually just faceless closer was over. The history of metal has seen much worse releases than this, but unfortunately this does not mean that Blitzkrieg’s first work deserves a lot of applause.