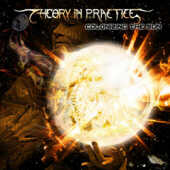 In a country known for great metal bands, Sweden's Theory In Practice are among the top of the heap. "Colonizing The Sun" is their follow up to the mind blowing "The Armageddon Theories". While the band still plays scorching fast technical Swedish death/black metal, "Colonizing The Sun" is an entirely different beast altogether. This album is a lot more straightforward than it's predecessor, showing the band concentrating on tighter songwriting and a more concrete structure.

Opener ‘Colonizing The Sun’ made my jaw drop and hit the floor the first time it assaulted my ears. This song is fast, lethal and full of incredible musicianship. What is unique about this band is that while they play dangerously fast, the speed is not caused by the drummer just hammering the shit out of his kit, but by guitarist/songwriter Peter Lake. The speed is in the guitars. His playing style consists mostly of single picked notes played so fast that they are hard to keep up with, as they are always changing into more and more sophisticated structures. This is all especially evident in this song. Lake's lead work is second to none. The song's solo showcases blazing speed, sweet melody and the primal aggression (as do most all of their solo's) Theory In Practice is known for. ‘Conspiracy In Cloning’ blasts through the speakers before you’ve even had a chance to catch your breath from the first tracks onslaught. This track showcases the bands newfound talent to make memorable songs, without losing any brutality or mind-blowing fretboard molesting. "Colonizing The Sun" is full of great songs, but another that sticks out to me after repeated listens is ‘Shapeshifter’. With it's great structure and almost "Epic" solo section, it really showcases everything this band has to offer.

There really aren't any songs on here that don't make the grade (Except perhaps ‘This Town Ain't Big Enough For The Both Of Us’, which wasn't written by the band anyways, so it doesn’t' really count!). After listening to this album non-stop for almost two weeks, I still can't find a way to explain this bands power. Everything, the vocals, guitar, bass and drums all complement each other perfectly. Each musician really gives this album their all, and the result is nothing short of amazing. Not one note on this album is out of place. One thing that has changed significantly since “The Armageddon Theories” is the vocals. Henrick Ohlsson doesn't use the Angelcorpse-ish snarl anymore, instead he has choose to utilize a more black metal scream, which reminds me much of “Anthems To The Welkin At Dusk” era Emperor. Songwriter/Guitarist Peter Lake deserves tremendous recognition for his work with this band. His guitar work could go head to head with anyone out there, and since he writes all the music, he is obviously a great composer. This album rules, but the only thing that might be slightly disappointing to older fans is that they no longer posses that chaotic, menacing feel of old. But this should be no problem as the new focus on clearer, more defined songs has, if anything made the band more lethal. The lyrics are very deep and philosophical and like the music, will challenge your mind, unlike the slash, slash, chop, kill, rape lyrics favored by most death metal bands. And, as always, the top-notch musicianship (especially the guitars...godly) is still in place and better than ever. This will definitely be in my top five by the end of the year.

Bottom Line: “Colonizing The Sun” is a blistering piece of technical death metal. If you like their other albums, or you just like music that really pushes the limits of what’s out there with superb musicianship and unrelenting aggression, don' let this one pass you buy. If you’ve never heard Theory In Practice before, it would be a good introduction to the band as it is more straightforward than their earlier work and easier to get into.