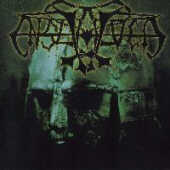 After “Hordanes Land”, their split album with Emperor, Enslaved released their debut album, “Vikingligr Veldi”. Often this album is confused to people for being self-titled because the title is not written on the album cover, but that’s not the case. This album is a massive journey throughout the bands stage of emotion filled Norwegian black metal.

Enslaved’s “Vikingligr Veldi” is an epic/majestic dirge into black metal. With five songs to fulfill its great ideas, this is a great debut for a band and is one of their best works. It’s quite a raw piece of work, and often seems trancelike with its repeating lines of music. But, that’s pretty much what this album is about. Enslaved have always been evolving, and at this stage they choose to convey their music with lots of emotions and moods. The atmosphere of this album definitely gives a heads up to the song structures. If they were any other way, this album wouldn’t be the same. They are structured in a way that the songs do not become boring at all even due to their long length. In this way, the band succeeded at making an impact with their debut.

The line-up is very notable. You’ve got Grutle Kjellson, Ivar Bjørnson, and Trym Torson. Maybe at the time two of those members were not very notable for their talents, and maybe they still aren’t today unless you are a fan of Enslaved. Trym Torson, though, is a monumental force to this album. His disastrous drumming (in a good way!) couldn’t fit this album better. The other members, if you are a fan of any other Enslaved album, are the same on this album as they are on the other albums. They do a great job even in their early days. Kjellson’s black shrieks are on par with any all other Norwegian forces, but you won’t find his clean voice until in the bands future. Bjørson’s guitar lines are trancelike and hypnotic, but always holding the aggression that the songs call for. This line-up of three was one of the more powerful line-ups in the early 90’s, and Enslaved’s standards have always put others to rest.

Bottom Line: Enslaved have always put out great records without becoming a parody of themselves, and “Vikingligr Veldi” is no different. While it is not as great as the rest of their work, it was a great debut for a band that didn’t find the need to sell themselves as shocking like the rest of the Norwegian scene, and had the ability to rise up amidst the competition.