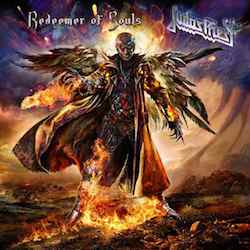 As with anything, age and the passage of time are often cruel and unforgiving masters to whom we are undeniably submissive. Sure, we can do everything to try and combat the inevitable, but eventually the laws of gravity and life give way and we have limits set for us. Sometimes we have to have the good sense to know when to hear that last bell and follow its dreaded tolling into that gentle goodnight. After hearing teaser tracks from the latest Judas Priest effort, Redeemer of Souls, I'm caught between a barbed wire fence and nearly 35-years of heavy metal greatness (dismissing the one or two bumps in that long and storied road).

Okay, long and short, this latest Priest record is criminally missing one of its major components in terms of sound, and that is Mister Ken "K.K." Downing. That familiar tonal assault I'm so used to hearing on each Priest record since 1980 is just gone, vanished into the nether of a myriad of conjecture and quick dissociative blurbs. As to why Downing decided to opt out of one of the greatest metal bands to ever walk the planet, I hear the rumors and see the aforementioned block quotes, but I can only surrender to my own personal feelings of something completely off and just not right. That little OCD moment aside, I sat here and more or less convinced myself that the utter disaster that was Nostradamus couldn't possibly be matched, and thankfully I was right. This newest record isn't anything close to that double-disc insult, but it also isn't at the level of credibility of Angel of Retribution, harkening the return of Rob Halford to the fold after a lengthy foray into Trent Reznor-esque boredom and an eventual return to the very medium once sarcastically declared "dead." Musically, Redeemer of Souls is a competent, even good album for your run of the mill NWOBHM band vying for a selected spot in this current resurgence of that primitive, yet fundamentally important sound. There are standout tracks, such as 'Valhalla' that really overpower me and get me feeling good about the Priest again, but I'd be remiss if I didn't say that there is so much studio magic on Halford's voice it should be a Honey Nut Cheerios commercial. The high register days of 'The Sentinel' and 'Dreamer Deceiver' are long over, I understand that, but the vocal performance here sports a very thin border between rudimentary and a simple going-through-motions. Is it offensive? No, not by any means, but I will say that the little clean vocal crooning in 'Sword of Damocles' is downright painful and should have been cut out completely from an otherwise decent track. These little indiscretions don't pile up too much, but they do tend to throw off the vibe and flow of the album. I suppose after 40-years going, Judas Priest no longer needs to worry about such things.

Sandwiched between spurts of goodness, tracks like 'March of the Damned' read more like a mediocre bar band trying to fire up a corner saloon filled with drunken leftovers from the 80's hair metal scene. Vocally, lyrically, even musically it falls well short of being anything close to memorable. The soloing is about as lackluster as it gets, which is depressing considering the magic sweeping from at least one set those fingers for all of these years. I'm not knocking Richie Faulkner or his ability to play his instrument; truth told, he is a very good guitarist, but if he was supposed to be some sort of cortisone injection into an aging Priest, that shot missed the target muscle. The closest we get to former glory is the opening riff in 'Down in Flames,' which recalls, quite vividly, 'Heading Out to the Highway' with its chunky riff and thumping bass line that made me momentarily smile. This track is one of the sandwich tracks I mentioned and resonates pretty well as something you might have heard from either Point of Entry or Painkiller. Even the vocals on this track are really as close to "nailing it" as Rob Halford will come, but I am anxious to hear some of the leaked live shows when they start trickling out there to see how this material stands up in the purest form possible.

Again, this album shows us an aged Judas Priest, and that little fact isn't lost on me. However, as a lifelong fan of the band I don't think it's unreasonable to assume (and hope) for a more spirited performance from these guys. When I hear this album all the way through for about the sixth or seventh time now, I am left wanting more. I want Downing and that familiar Tipton/Downing trade off that still makes Dave Murray and Adrian Smith so damn potent in the same age bracket. I want a fire in the belly; the same fire that kept a dying Ronnie James Dio going strong and powerful for a lot longer than probable as he approached 70. My point is, despite the ever-declining lifespan of us all, there is still something to be said for giving it your all and just going for it with the proverbial metal on the floor and the open wind slapping you into violent submission. Even the opening notes of 'Cold Blooded' seem so lifeless and solicit no real emotional engagement, and that's the saddest part of this record for me (though the solo in this song is the best on the album.) There are definite moments of pinhole-lighted magic disseminated throughout the entire album, but overall Redeemer simply fails to thrill me like it should, but I keep myself satiated by telling myself, "At least it ain't that last pile of crap." We all have our little pick-me-ups.

I love Judas Priest. I love everything about the band: the history, the black leather-studded, whip-carrying, motorcycle-riding, unearthly-screaming Judas Priest that I grew up with all through the 80's into the present day. It pains me to my core to see one of my favorite bands simply lose a fire that has been burning for so long, and please don't sedate yourself with talk of them being older and still being a great band for its age. Even worse, I've seen it bandied about that they are legends and should "get a pass" for being less than stellar now, and this is where I vehemently disagree. Picture, if you will, an aging pugilist, whose better days of single-vision are long behind him. He knows nothing else but how to fight, and despite the brain damage and obvious grasping at straws to stay both relevant and competitive, he simply doesn't have the tools to keep up any longer. Yet he stays. He takes beating after beating, swelling and bleeding from every orifice on his head, and he simply won't quit. Why is this man so stubborn? Pride? Conviction? Stupidity? One too many blows to the head? Who can say? All we see is this shell of former greatness that is well past his prime, and the last visage we'll have of him is a weary and stumbling artifact walking away, not to a Bill Conti composition, but to a quiet, pitying darkness that will slowly envelop him as he shrinks from sight into the rest of his broken existence. The bell has rung, and it's time to let it go gracefully while the last visuals are ones of amazement and triumph. It will not get any better from this point on, and we need to see that and accept it.

The world isn't fair, but it is consistent.

After seeing all those eights and nines in so called 'big' metal magazines, I decided to get myself a copy and see what this fuzz is all about. By now I should have known better that high scores to sell magazines and acquire advertisers rarely translate into actual quality of the material. Damn it, I got tricked again!

OK, I wasn't expecting Ram it Down or Painkiller, I abandoned that hope around the turn of the century, but this must be one of the least exciting pieces of music I've heard in a while (from well established band). There was not a single track that I wanted to hit repeat while listening to Redeemer Of Souls, not even one! What's worse, more than on one occasion I actually was tempted to skip a few, and only because I was writing this review I forced myself to hear the whole thing. I don't want to be mean or rude here but these days there are more dynamic and aggressive songs on alternative radio. Most of the compositions are just boring, unimaginative patchwork of notes with ordinary riffs, only from time to time saved by a nice lead or a solo. Halford's voice lost its teeth long time ago and this time around he generally stays in a safe zone simply singing dull vocal lines without any vigor or zest. Dreadful drumming lacking excitement or meaningful tempo changes tops this gem. Sure I can find few interesting riffs or above average melodies like in Hail of Valhalla or some passion from Halford in Sword of Damocles, but this album clocks over an hour and this is Judas Priest not a debut release from unknown band. Trust me, if it wasn't for band's name, most of you wouldn't even look at this thing to start with. And that pretty much says it all, Redeemer Of Souls is a record for diehard fans only with a very strong emphasis on "diehard", but I don't see any new metal maniacs turning their heads towards this band after that record.

Even though I haven't heard anything special from Judas Priest in years, this will still be my disappointment of the year. With a few exceptions, Redeemer Of Souls is mundane and boring with uninspired songwriting and not the best production to top it all. It's almost like they knew that's not our best material so let's mud the mix a little.