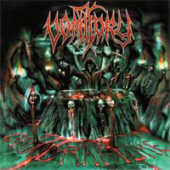 Finally. One of my favorite bands of masochistic eardrum molestation and mind depravation have returned armed with their fourth and best album, “Blood Rapture”. After listening to countless Swedish melodic-death releases, time has come for some real death metal and there are not too many bands, if any, that can do it better than Vomitory. Definitely one of the best poundings I’ve heard in years.

Maybe I got too picky but lately nothing could bend my knees and force me to taste the ground... but with the first guitar stroke I found myself laying on the floor licking carpet like a dog that disobeyed his master. This music should be played in schools, workplaces, churches and even building elevators. A monster wall of guitars powered by a mighty rhythm section hits every part of your body. The classic guttural vocals of Erik concludes this destructive act. If you’ve never heard them (I should start calling you names here!) picture the best moments from Napalm Death (post “Scum” era), Benediction, Bolt Thrower and Slayer mixed together so well that your wildest dreams never imagined anything like it. This might be the most “pit-friendly” music ever... There’s no way you won’t start banging your head or start up a convulsive dance to join fellow possessed bodies.

“Blood Rapture” radiates with brutality and aggression but with its outstanding and memorable riffs and overall dauntless and epic feel it’s not just a chaotic onslaught. It’s a well thought master plan in a mind of a serial killer where every move has its meaning and carries destructive value. I said it before and I say it again, albums like “Blood Rapture” and bands like Vomitory make death metal the best thing that happened to mankind and I’m thrilled that those four Swedes make sure it stays this way.

The only gripe you might have is that Vomitory’s music is not too original but you'll care about that like you'll care about the exact number of hairs on my ass. Best track? Are you kidding me? After each song I want to hit repeat button but the next one starts with another killer riff and the story continues until the end of the album... and then we start it all over again. Love it!

Bottom Line: I haven’t had so much fun since I put my hands on my first girlfriend... and believe me that was a long time ago. Thank God for Vomitory. Let those guys live long and in prosperity.